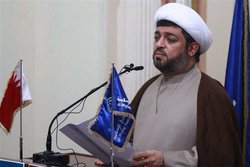 Bahrain’s main Shia opposition group, the al-Wefaq National Islamic Society, says the ruling Al Khalifah regime is contributing to the liquidation of the Palestinian cause through hosting a Washington-led conference in support of US President Donald Trump’s controversial proposal for “peace” between the Israeli regime and Palestinians, dubbed “the deal of the century.”

RNA - “The Manama regime, through hosting a US-Zionist conference next month, is helping the obliteration of the Palestinian cause in favor of the Zionist regime (of Israel), and according to Israeli conditions,” the deputy secretary general of al-Wefaq, Sheikh Hussein al-Daihi, said on Thursday.

He added, “It’s not the first time that the Bahraini regime stabs Muslims and reneges on their major issue of concern, which is Palestine. The regime has rushed to normalize ties with the Zionist entity.”

The opposition figure further noted that the Manama conference scheduled for June 25-26 is a “failed step to establish a new Middle East” according to US standards.

Hamas, in a statement issued on Monday, also called on Arab countries to provide the Palestinian people with every support to confront and frustrate the US “deal of the century.”