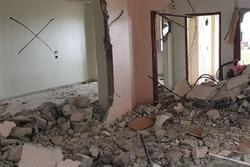 Israel has demolished 5,000 Palestinian homes in Jerusalem since the occupation of the city in 1967, according to a report.

RNA - According to a report by the Land Research Center, the number of buildings destroyed between 2000 and 2017 rose to 1,700, Palinfo reported.

Al-Quds International Foundation said that Israel demolishes Palestinian homes in Occupied Jerusalem under the pretext that they are unlicensed.

It added in a research paper released on Saturday that the Israeli gangs in 1948 committed massacres against the Palestinians, stole their lands, and occupied Sinai and Golan Heights in violation of international law.

Israel, the paper noted, between 1967 and 2017 established about 14 settlements and hundreds of random outposts in East Jerusalem. Nearly 220,000 Israeli settlers are living in these settlements.

It stated that Israel pursued a forced displacement policy against the Palestinians and seized over 26% of the total area of East Jerusalem to build new settlements or expand existing ones.

Not only the settlement construction but Israel has also adopted other policies with the aim of wiping out the Palestinian presence in Jerusalem, like the apartheid wall, unlawful killing of Palestinians, arbitrary arrests, and control of the education sector.