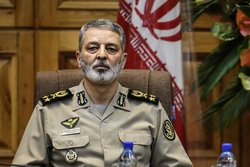 The Iranian Army commander-in-chief says the US pursues a policy of Iranophobia aimed at milking the Arab countries of the region.

RNA - “The incidents that recently took place in the United Arab Emirates and Iraq after the US entered the region are not unpremeditated and they aimed at Iranophobia and milking the Arab [countries of the region],” Major General Abdolrahim Moussavi said on Wednesday.

The senior Iranian commander was pointing to a Sunday night rocket attack on the Green Zone of the Iraqi capital Baghdad, where the Iraqi government's administrative buildings and foreign missions, including the US embassy, are located.

No one claimed responsibility for the Sunday attack that hurt no one and its target was not specified, but US President Donald Trump was quick to point the finger at Iran.

Moussavi was also apparently referring to a recent “sabotage” attack targeting a number of commercial ships off the UAE’s territorial waters.

On May 12, four oil tankers, including two Saudi ones, were purportedly targeted near the port of Fujairah, in what the Emirates described as “sabotage” attacks. While Riyadh and Abu Dhabi failed to produce evidence of the attacks on their vessels, pictures emerged of a Norwegian-flagged tanker at the port having sustained some damage.

Two days later, drone strikes were launched on two oil pumping stations in Saudi Arabia. These attacks were believed to have been carried out by Yemen’s Houthi fighters in retaliation for the prolonged Saudi war against Yemen.

Saudi and Emirati officials have not said who carried out the attacks on the tankers and the pumping stations, but some political and media figures within the United States have claimed that Iran is responsible.

A day after the reported attacks on the oil tankers, Tehran called them “worrying,” and Iranian Foreign Minister Mohammad Javad Zarif later called them “suspicious.”

Elsewhere in his remarks, the Iranian commander said that the US should know that the security of the Middle East is provided by the countries of the region alone and that the outsiders have no choice but to leave the region.

Enemies must know that they will be totally destroyed should they try to ignite a war, Moussavi warned.

Last year, Trump stoked tensions with Iran after he unilaterally pulled his country out of a 2015 multilateral nuclear deal between Tehran and six world powers and unleashed the "toughest ever" sanctions against the Islamic Republic despite international objections.

The US further heightened tensions after it dispatched an aircraft carrier strike group, a bomber taskforce, and an assault ship to the Persian Gulf earlier this month, citing an alleged likelihood that Iran could target American interests in the region.

Recently, the White House has, however, sent mixed signals over its stance regarding Iran.

According to Press TV, just days after saying he was ready for talks, Trump issued a direct threat to Iran, saying the Islamic Republic would be destroyed if it attacked US interests.

"If Iran wants to fight, that will be the official end of Iran. Never threaten the United States again," Trump tweeted on Sunday.

Trump posted his anti-Iran tweet after the Sunday night rocket attack on the Green Zone of Baghdad.

Soon afterwards, though, he downplayed what he has been trumpeting as “Iran’s threat” to the region and the US interests.