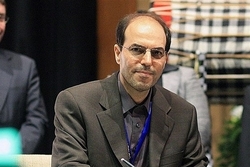 Iranian Deputy Foreign Minister for Legal and International Affairs Gholam Hossein Dehqani warned the Muslim states to resolve differences, warning that such gaps are only in the interest of the US and Israel.

RNA - Dehqani made the remarks in Tehran, addressing the Organization of Islamic Cooperation (OIC) ambassadors residing in Iran.

He called for improvement of unity among OIC member states, noting that the OIC and its summits, including the Mecca summit, should be used to promote solidarity among the Islamic Ummah and not a venue for proposing irrelevant issues and provoking divisions among Muslim states.

The official cautioned the Islamic countries about the Zionists' divisive plots, adding that the issue of Palestine should be a top priority for the Islamic Ummah.

Sowing discord among Muslim countries is at the service of the Zionist regime and US President Donald Trump, he added.

Dehqani criticized the OIC general secretariat's discriminative approach towards Iran, adding that the current approach is against the OIC rules and regulations.

Saudi Arabia has called for two urgent meetings of its Arab allies later this month to discuss recent attacks on shipping and oil-production sites amid rising tensions in the region.

Saudi King Salman on May 18 called for leaders of the PGCC and AL to meet for the emergency summits in Mecca on May 30.

According to Fars News Agancy, aformer Kuwaiti legislator said on Tuesday that the Saudi-sponsored urgent meeting of the Persian Gulf Cooperation Council (PGCC) and the Arab League to discuss escalating tensions in the region due to be held in Mecca would prove useless.

"Three meetings will be held in Mecca in 10 days and unfortunately, experience left from past meetings shows that they do not produce positive results," Nasser Al-Duwailah, also a former advisor to the Kuwaiti defense minister, wrote on his twitter page.

He questioned effectiveness of such meetings to improve the situation, expressing concern that the present trend could turn into a major catastrophe after which the Persian Gulf Arab states and Muslims would not have any authority for decision-making.

Al-Duwailah voiced the hope that US President Donald Trump and his wife would not be invited to the Mecca meeting.