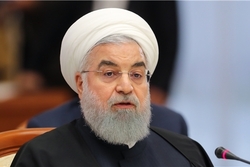 President Hassan Rouhani blasted the White House for continuing its hostilities against Iran, and said that the Iranian nation has always been triumphant over the US.

RNA - "The Iranian nation might be under West's pressures, but it will not bow its head in the face of bullies," President Rouhani said on Tuesday.

The Iranian president recalled how Washington has regularly walked back from its threats against Iran shortly after issuing them.

"The White House announces that the people of Iran should be wary of an attack, however, no longer than two hours later, under pressure from the Pentagon, the US president declares that Washington was not after launching any attack against Iran," the Iranian president added.

Zarif in furious response reacted to Trump's recent threat on twitter that a fight with the US would be the "official end of Iran" if Iran wants to fight, replying in a tweet that the US president is "goaded by B-Team (John Bolton, the US national security advisor, Bibi, Israeli Prime Minister Benjamin Netanyahu, Saudi Arabian Crown Prince Mohammed bin Salman, and Abu Dhabi’s Crown Prince Mohammed bin Zayed)."

He added that Trump "hopes to achieve what Alexander, Genghis and other aggressors failed to do (against Iran)", adding that Iranians have stood tall for millennia while aggressors (have) all gone.

As the US administration seeks to intimidate Tehran into talks, Iranians have remained adamant, stressing that no war is in the offing although the country's military forces are fully ready to provide a crushing response in defense if they ever come under strike.

Addressing the heads of the country’s executive, judiciary, and legislative branches as well as other senior officials, parliamentarians, and important figures in the country’s political, social, and cultural spheres earlier this month, Ayatollah Khamenei ruled out the possibility of war between the United States and Iran despite heightened tensions between the two sides, saying Washington knows engaging in such a conflict would not be in its interest.

As an example, Ayatollah Khamenei said, "They (Americans) say we should negotiate over your (Iran’s) defensive weapons, (questioning) why do you build (for instance) a missile with a given range. Reduce the range (of your missiles, they say,) so you would not be able to hit our bases."

According to Fars News Agancy, the Leader further played down Washington’s highly belligerent rhetoric against Iran, saying its real capability did not match its loud bluster, and that it “needs to engage in (such bluster)."

Ayatollah Khamenei said Washington gives priority to Israel’s interests over the benefits of all others, adding, “The control of many affairs rests in the hands of the Zionist society."