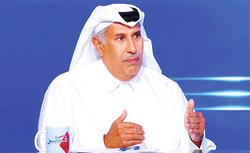 Former Head of al-Jazeera news channel Yasser Abu Hilala and Former Qatari Foreign Minister Hamad bin Jassim underlined that certain Persian Gulf Arab states should not pin hope on a war between the US and Iran as Trump is only after an annex to the 2015 nuclear deal.

RNA - Abu Hilala wrote on his twitter page on Saturday that the visit by US Secretary of State Mike Pompeo's visit to Iraq contained a message to soothe Iran as Donald Trump is only after an annex to the nuclear deal to make is a Trump deal.

"Trump is after an agreement of his own and not of Obama's," he added.

He said the US has ensured that it is not after a war as show in Trump's tweets about his desire to talk with Iran. Also, Iraq has received sanctions waivers from Washington, but they have been told that there won't be any official declaration about the exemption, he said.

Abu Hilala referred to the Saudi and UAE officials and media's pleasure in the US warmongering against Iran, and said that Trump uses Iranophobia to further milk Saudi Arabia as long as it can.

Meantime, Hamad bin Jassim wrote on his twitter page that there will be no war between the US and Iran and the current tensions are only aimed at returning the two sides to the negotiating table.

The United States tightened the screws further on Iran with sanctions on its metal industry on the day Tehran said it was suspending some of its commitments under the 2015 nuclear deal with world powers.

The White House said that the new sanctions, announced on May 8, target Iran's steel, aluminum, copper and iron sectors.

Hours earlier, Iran said that it would no longer sell its surplus enriched uranium and heavy water to other nations as stipulated in the nuclear agreement between Tehran and six world powers few days after the US ended waivers on nuclear cooperation with Iran.

In return, Iran's Supreme National Security Council (SNSC) announced in a statement on Wednesday that the country had modified two of its undertakings under the Joint Comprehensive Plan of Action in return for the US abrogation of the deal and other signatories inability to make up for the losses under the agreement, warning that modifications would continue if the world powers failed to take action in line with their promises.

According to Fars News Agancy, Iranian President Hassan Rouhani in a letter on Wednesday informed the Group 4+1 on stopping implementation of a number of Tehran's undertakings stated in the 2015 nuclear deal.

Iranian Deputy Foreign Minister for Political Affairs Seyed Abbas Araqchi submitted the letter to the ambassadors of the G4+1 to Tehran after they were called to the foreign ministry on Wednesday morning.

Top EU diplomats said on Thursday they remain committed to the deal but will not bend to any ultimatums.