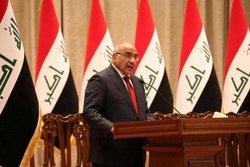 Iraqi Prime Minister Adel Abdul Mahdi says he believes “things would end well” between the United States and Iran despite growing tensions between the two arch-enemies over Tehran’s nuclear program and its missile capabilities.

RNA - Speaking at a news conference in the Iraqi capital, Abdul Mahdi said Baghdad was communicating regularly with Tehran and Washington.

Earlier on Tuesday, Leader of the Islamic Revolution Ayatollah Seyyed Ali Khamenei ruled out the possibility of war between the United States and Iran despite heightened tensions between the two sides, saying Washington knows engaging in such a conflict would not be in its interest.

The Leader further said any confrontation between the US and Iran would not be “a military one,” and that “there was not going to be any war.”

Meanwhile, US President Donald Trump has rejected a New York Times report that American officials are preparing a military plan to deploy up to 120,000 troops to the Middle East to counter any threat by Iran.

“I think it's fake news, OK? Now, would I do that? Absolutely. But we have not planned for that. Hopefully we're not going to have to plan for that. And if we did that, we'd send a hell of a lot more troops than that,” Trump told reporters at the White House.