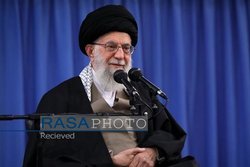 Supreme Leader of the Islamic Revolution Ayatollah Seyed Ali Khamenei strongly blasted certain countries of the region for supporting Washington and Tel Aviv regimes, but meantime said that they will one day come to know that they have made mistakes.

RNA - "We have witnessed that there was some sort of awakening, some sort of enthusiasm among Islamic countries but like a burning flame that is put out by pouring ashes over it, it was extinguished, because they relied on the US and the Zionist regime. They did not realize what they had to do," Ayatollah Khamenei said in a meeting with the reciters of the Holy Quran at the Hussayniyah of late Imam Khomeini.

The Supreme Leader reiterated that ignoring the Quranic advice not to trust the oppressors is predicament of the people of the world today, and said, "They trust the tyrants and they become miserable."

The Supreme Leader regarded recitation ceremonies as occasions to celebrate the artistic aspect of the Quran, and said, "This artistic masterpiece should be performed artistically."

In relevant remarks earlier in May, Ayatollah Khamenei reassured that national solidarity will defuse all the plots and conspiracies against Iran.

Ayatollah Khamenei, in a meeting with Iranian teachers today, said, "One of the most essential tasks is to safeguard unity and everyone has a duty to protect and safeguard this unity which is a (key) factor to ensure national sovereignty."

He said the US has taken very hostile measures in various economic, media and political areas, and added, “Today the enemy's combative, political, economic and cyberspace arrangement is an arrangement for war and it appears that the military field is the only area they have not made such an (war) arrangement yet. Of course, our armed forces are vigilant. The nation should make a proper arrangement to thwart any aggression.”

"By God's grace, enemy's plots, conspiracies and massive propaganda to engage the minds will lead to their detriment and you the dear youth will witness, by the grace of God, the US defeat and the Zionists’ downfall as well as the ultimate victory and glory of the Iranian nation," he noted.

He added, “Just like some wealthy countries that devote their big pockets to traitors who perpetrate crimes against humanity, because they lack human assets."

Condemning the UN 2030 agenda, he said, “The essence of this agenda is that our educational system would teach children a lifestyle and philosophy of life-based on Western principles. This means that you, the teachers would train soldiers and footmen for the West in your classrooms.”

Elsewhere in his remarks, Ayatollah Khamenei described the plunder of Iran’s oil reserves during the tyrannical regimes ruling over Iran as another example.

"(Another example is) our country lies on an ocean of oil. We were unaware of it and did not even have the know-how (to extract it)," he noted.

He said that the western countries “took away our oil and built factories for themselves used it in their wars and gave us a little in return during the monarchy. This is the result of neglecting to invest in human resources”.

He described such an educational system as the prerequisite to the ideal status Iran would win in science and knowledge where anyone would feel the need for learning Persian in order to acquire knowledge.

Back in December 2018, Ayatollah Khamenei warned the Iranian nation to remain vigilant against new US plots for the next year, saying that Washington might have made done the propaganda this year, but be readying to stage the main part of its plot in 2019.

"Earlier this year, the US claimed that Iran was to have a hard summer and that the revolution wouldn’t see its 40th anniversary. To their dismay, this summer was one of the best summers; and the Iranian nation will magnificently celebrate the 40th anniversary of the revolution on 22nd of Bahman (February 11)," Ayatollah Khamenei said, addressing the family members of the Islamic Revolution's martyrs in Tehran on December 12.

The Leader of the Islamic Revolution of Iran called for the Iranian nation to keep vigilant in the face of deceits by the US, saying, "The Iranian nation should maintain their awareness. When the US says in 2018 they will do this or that, it could be a deceitful plot. They might want to stir controversy in 2018 while their actual plots are for 2019. You should be completely ready and alerted."

Ayatollah Khamenei described the US as a vicious enemy, and said, "The US is a wicked enemy, united with the Zionists and the reactionary regimes of the region. We are of course stronger and until now they have been unable to do a thing, and they won't be able to anything in the future."

The Supreme Leader advised the young generation of Iranians as well as political entities to be vigilant not to rely upon the enemy and prepare the field for the enemy.

The Iranian officials have downplayed the US sanctions and pressures.