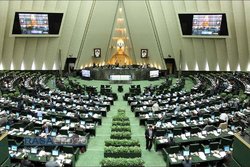 The Iranian parliament's Committee on National Security and Foreign Policy has passed a double-urgency motion to take a reciprocal measure against the United States' move to designate the Islamic Revolution Guards Corps (IRGC) as a terrorist organization.

RNA  - "Based on one of the motion's articles, the Islamic Republic of Iran's government is duty-bound to carry out reciprocal and firm measures against American forces' terrorist actions that endanger the Islamic Republic of Iran's interests, within the framework of decisions ratified by the Supreme National Security Council," the committee' spokesman Ali Najafi Khoshroudi told reporters on Monday.

Another article of the motion also obliges the government to take legal action at international bodies against the illegal US move and do its utmost to foil Washington's measures by maintaining mutual and multilateral contacts and holding consultations with world organizations, he added.

The parliament's committee passed the motion on the same day that the United States officially registered Iran’s IRGC as a foreign terrorist organization, according to a notice published on the website of the US Federal Register.

US Secretary of State Mike Pompeo said in his notice that based upon a review of the Administrative Record assembled in this matter, and in consultation with the Attorney General and the Secretary of the Treasury, “I conclude that there is a sufficient factual basis to find that the relevant circumstances described in section 219 of the Immigration and Nationality Act, as amended (hereinafter “INA”) (8 U.S.C. 1189), exist with respect to the Islamic Revolutionary Guard[s] Corps, also known as [the] IRGC.”

According to Press TV, US President Donald Trump said in a statement on April 8 that the Iranian elite forces' designation "makes crystal clear the risks of conducting business with, or providing support to, the IRGC. If you are doing business with the IRGC, you will be bankrolling terrorism."

In a statement, the SNSC strongly condemned the "illegal and dangerous" move by the US regime against the IRGC and said, "The Islamic Republic of Iran regards this baseless move as a major threat to regional and international peace and security and a blatant violation of the compelling rules of international law and the United Nations Charter."

In a meeting with IRGC personnel and their family members in Tehran last week, Leader of the Islamic Revolution Ayatollah Seyyed Ali Khamenei said the recent US decision against the IRGC is rooted in America’s “rancor” against the force, which has been in the forefront of the fight against enemies.

“The IRGC is the vanguard both on the field confronting the enemy on [Iranian] borders and even several thousand kilometers away [in Syria] as well as on the political battleground against the enemy,” the Leader said, adding that Americans hold a grudge against the force for that reason.

JCPOA was aimed at eliminating sanctions, I don’t trust the 3 EU states