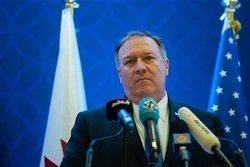 Iran has dismissed US Secretary of State Mike Pompeo’s claims of Tehran’s negative role in the implementation of a ceasefire deal between Yemen’s warring sides in the port city of Hudaydah, saying Washington’s “blame game” is meant to cover up the Saudi-Emirati crimes in the war-torn country.

RNA - Iranian Foreign Ministry Spokesman Abbas Moussavi said on Tuesday that the US secretary of state’s accusations were aimed at covering the crimes being committed by Saudi Arabia and the United Arab Emirates in the war on Yemen and the pair’s attempts to hinder the Stockholm agreement.

Speaking at an event in Washington hosted by The Hill newspaper on Monday, Pompeo claimed that Iran is directing Yemen’s Houthi Ansarullah fighters to renege on the commitments they made in Stockholm last December.

The Houthis “continue to refuse to comply with the agreements that they signed up for in Stockholm, Sweden, they refuse to withdraw from the port of Hudaydah... this is because Iran has chosen to direct them to do that,” Pompeo said.

In December 2018, representatives from the Houthi Ansarullah movement and the Riyadh-sponsored government of ex-president, Abd Rabbuh Mansur Hadi, reached the truce deal during UN-mediated peace talks in Sweden.

Under the deal, they agreed to the withdrawal of their troops and the deployment of UN monitors to the port city, a lifeline for millions of Yemenis.

The Iranian spokesperson further said reports indicate cooperation between the Ansarullah-led government, known as the National Salvation Government of the Republic of Yemen, and the United Nations special envoy for Yemen Martin Griffiths, “their readiness to implement the Stockholm agreement and , at the same time, the opposite side’s [bid] to create obstacles” in the implementation process.

Moussavi said the Islamic Republic has played a positive role in efforts that led to the conclusion of the Stockholm agreement.

Instead of leveling unfounded allegations against other countries, the US, as a country that support Saudi Arabia and the UAE crimes in Yemen, should urge the aggressors to stop throwing a wrench in the implementation of the truce agreement and remain committed to their obligations under the deal.

Yemeni forces have repeatedly accused Saudi Arabia and its allies of violating the Stockholm agreement.