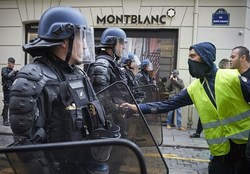 Tens of thousands of Yellow Vest protesters took to the streets for a 24th consecutive Saturday, with many saying the proposals French President Emmanuel Macron announced this week don't go far enough to address the plight of struggling workers.

The 24th consecutive weekend of demonstrations saw more than 5,000 protesters take to the streets across France, including 2,600 in Paris, according to interior ministry figures, which the Yellow Vests have often questioned in the past.

In Strasbourg, tear gas filled the streets as police struggled to keep hundreds of demonstrators away from the EU Parliament buildings. Police have blocked roads and bridges and clashes have broken out between heavily armored riot control officers and masked protesters. Wearing improvised gas masks, the Yellow Vests kicked tear-gas canisters back at the battalions of police blocking the roads.

Paris has been the epicenter of the Yellow Vest movement since it began as a show of opposition to a planned fuel tax hike last November. On Saturday, activists surrounded the headquarters of several French television networks there, demanding better coverage of their weekly demonstrations.

Protesters, police clash on 21st round of 'yellow vest' demos