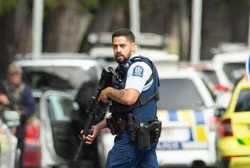 The member states of the United Nations Security Council (UNSC), in a statement, unanimously and categorically denounced the twin terrorist assaults on two mosques in New Zealand, describing them as heinous and cowardly attacks.

RNA - In the statement issued on Friday, the UNSC member states condemned in the strongest terms the heinous and cowardly terrorist attack that took place at Al Noor Mosque and Linwood Mosque in Christchurch, New Zealand.

“The members of the Security Council expressed their deepest sympathy and condolences to the families of the victims and to the Government of New Zealand and they wished a speedy and full recovery to those who were injured,” the statement read.

It added, “The members of the Security Council reaffirmed that terrorism in all its forms and manifestations constitutes one of the most serious threats to international peace and security.”

Underlining the need to hold perpetrators, organizers, financiers and sponsors of these reprehensible acts of terrorism accountable and bringing them to justice, the UNSC members urged all States, in accordance with their obligations under international law and relevant Security Council resolutions, to cooperate actively with the Government of the New Zealand and all other relevant authorities in this regard.

Also, hours after the attacks, a deluge of condemnation came from all over the world, including by the Lebanese Hezbollah, the UN Secretary General António Guterres, EU Foreign Policy chief Federica Mogherini, Head of the Catholic Church and sovereign of the Vatican City State Pope Francis, the Muslim Council of Britain (MCB), Turkey, Qatar, Jordan, Iraq, the UAE and Bahrain.

In a related front, Iranian President Hassan Rouhani condemned the Friday massacre of Muslim people in New Zealand, and called for international campaign against the Islamophobia which he said is unfortunately fueled by certain Western governments.

President Rouhani said, in a message issued late on Friday, the massacre of Muslim people in New Zealand once again highlighted the need for an all-out international fight against Islamophobia fueled by certain Western governments.

The Iranian president condemned the “terrorist and racist” attack on Muslim worshippers, and described the massacre as a “barbaric and painful” incident which broke the hearts of all Muslim people in the world, especially the Iranian nation.

“This barbaric crime, which resulted in the martyrdom and injury of a number of innocent and defenseless worshippers, is another proof of the need for an all-out fight against terrorism and hate-mongering toward other religions and ethnic groups, and the Islamophobia which is common in the West, and unfortunately fueled by certain Western governments,” Rouhani said in his message.

“This crime indicated that terrorism is still among the important issues of the world, and needs an integrated fight and a united approach by all countries against violence and extremism in any part of the world,” he noted.

“The Islamic Republic of Iran is still committed to decisive fight against terrorism and racism, and is sure that, thanks to the unity and solidarity of Muslim people, such blind and aimless plots by the enemies would result in nothing but further disgrace for them,” he added.

Rouhani also called on the international community, particularly Muslim states, to show serious reaction to these anti-human crimes, and “disgrace the overt and covert sponsors of such moves”.

The Australian gunman behind the massacre, identified as Brenton Tarrant, broadcast live footage on Facebook of the attack on one mosque in the city of Christchurch, mirroring the carnage played out in video games, after publishing a "manifesto" in which he denounced immigrants, calling them "invaders".

In his manifesto, Tarrant said he saw US President Donald Trump as “symbol of renewed white identity and common purpose.”

In a related front, Iranian Foreign Minister Mohammad Javad Zarif, in a telephone conversation late on Friday with his Turkish counterpart Mevlut Cavusoglu, condemned the Friday terrorist attack on Muslims in New Zealand as a heinous crime, and called for an extraordinary session of the Organization of Islamic Cooperation (OIC).

In the conversation with Cavusoglu, the foreign minister of Turkey, as the OIC's rotating president, Zarif urged Muslim countries to show a "proper reaction" to the terrorist attacks on two mosques in New Zealand that killed at least 49 worshippers and wounded dozens during Friday prayers.

The top Iranian diplomat also told his Turkish counterpart that the OIC should hold an immediate and urgent meeting at the level of leaders or foreign ministers to discuss the terror incident in New Zealand and a recent attack by Israeli settlers on the al-Aqsa Mosque compound in the occupied Old City of East Jerusalem al-Quds.

Earlier on the day, hours after the twin terrorist attacks, Zarif posted a tweet where he lamented that anti-Muslim comments like those of US President Donald Trump have led to attacks on mosques and violence against Muslims.

He also posted two pictures along with his tweet showing that Trump, in his race for the White House, tells media “I think Islam hates us” and another screenshot showing hate-tweets of Australian Senator Fraser Anning who blames immigrant Muslims for violence in his country.

“Impunity in Western ‘democracies’ to promote bigotry leads to this,” Zarif said adding that both “Israeli thugs” entering “mosque in Palestine to insult Muslims” and terrorists in New Zealand livestreaming “their murder of 49 Muslims” are the consequences of the spread of Islamophobia in the Western societies.

“Western hypocrisy of defending demonization of Muslims as ‘freedom of expression’ MUST end,” Zarif urges the Western community to stop its anti-Islamic campaign.

Qassemi described the attack as “inhumane” and “barbaric”, calling on the New Zealand government to quickly identify the perpetrators of this racist act, and confront them by administering justice without any consideration.

“Any terrorist act, no matter where it occurs or by whom it is carried out or under whatever pretext and motives, must be condemned by all countries," said Qassemi, adding "governments must not allow racist and anti-Islam sentiments to endanger the security and peace of the citizens of their countries."

Gunmen entered two mosques and began shooting in New Zealand's city of Christchurch on Friday with police saying there were many dead, while police defused several improvised explosive devices found attached to vehicles.

At least 49 people have been killed and tens of others seriously injured after gunmen opened fire in two mosques in the New Zealand city of Christchurch on Friday, in what is now the worst ever mass shooting in New Zealand history, World News reported.

"A serious and evolving situation is occurring in Christchurch with an active shooter," New Zealand Police Commissioner Mike Bush said on Friday, adding, "Police are responding with its full capability to manage the situation, but the risk environment remains extremely high".

Bush said four suspects were in custody - three men and a woman - but added that "let's not presume the danger is gone".

A number of improvised explosives were found attached to the assailants’ vehicles, but it is not clear whether they were planning a suicide attack. The explosives were then defused.

Prime Minister Jacinda Ardern called the incident a terrorist attack in a Friday press conference, stressing that the suspects held "extremist views" that have no place in New Zealand or the world.

Ardern described the attack as "one of New Zealand's darkest days".

"What has happened here is an extraordinary and unprecedented act of violence," she said, adding that the attackers have "no place in New Zealand."

In the aftermath of the attacks, New Zealand has been placed on its highest security threat level according to the PM.

A total of 48 patients, including young children with gunshot wounds, are have been admitted to Christchurch hospital for treatment.

Four people were taken into custody, three men and one woman, in connection with the attack but only one has been charged with murder so far. It has been confirmed that all four held extremist views but were not on any police watchlists.

Authorities have urged people in central Christchurch to stay indoors. Police warned worshippers not to visit mosques "anywhere in New Zealand". New Zealand police have also warned all mosques countrywide to shut their doors due to a "very serious and tragic incident involving an active shooter".

Eyewitnesses told local media that the gunman, dressed in a military-style outfit, started randomly shooting people in the Masjid Al Noor mosque with his automatic rifle.

The shooter entered the Masjid Al Noor mosque 10 minutes after prayers began and let off “dozens, if not hundreds of rounds”, witness Ahmad al-Mahmoud told New Zealand outlet Stuff. He described the man as white-skinned, blond, short, and wearing a helmet and bulletproof vest.

Police had confirmed a second shooting occurred at the Linwood mosque during Friday prayers in the South Island city, but no details were immediately available.

But, a witness said they saw a man leave the mosque wearing camouflage gear and a motorcycle helmet, while unconfirmed reports indicated that a bomb was found on nearby Strickland Ave.

Witness Len Peneha said he saw a man dressed in black enter the Masjid Al Noor mosque and then heard dozens of shots, followed by people running from the mosque in terror.

"I saw dead people everywhere," Peneha - who lives next to the mosque - stated, adding that he also saw the gunman flee before emergency services arrived

One man in the mosque, with blood stains all over his clothes, said he hid under a bench as the shooting took place, adding that about 50 people were inside the building.

"It was unbelievable. I saw about 20 people, some dead, some screaming," one eyewitness told local television, adding, "I saw on the floor so many bullet shells, hundreds."

Some worshippers managed to escape through windows and doors but "many people had been hit". About 10 to 15 people were seen outside the mosque, "some alive, some dead", according to reports.

One of the shooters, believed to be a 28-year-old Australian man, livestreamed the attack on Facebook and posted content on Instagram, according to local media, and penned a lengthy manifesto characterizing the shooting as a “terrorist attack”.

New Zealand’s three largest internet providers, Spark, Vodafone and Vocus, have announced they are blocking customers’ access to three websites located outside the country that are still hosting the livestream of one shooter’s rampage, an unprecedented restrictive measure Spark spokesman Andrew Pirie called “the responsible thing for the industry to do”.

The attack resulted in the highest death toll from gun violence in the nation’s recent history.

US church membership down sharply since 1999

A national referendum in territory of Palestine