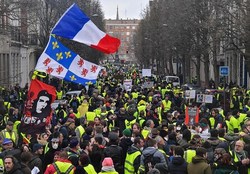 French police have fired tear gas to disperse protesters who took to the streets of the capital Paris to mark May Day rallies and protest against President Emmanuel Macron's policies.

Police fired tear gas and stingball grenades to disperse a group of hooded and masked protesters in the capital.

Some demonstrators wearing hoods or yellow vests responded by hurling projectiles at the police. Several people were slightly injured during the clashes.

"While the inter-union procession was to start at 14:30 (1230 GMT), unprecedented and indiscriminate repression took place following the acts of violence by some parties," it said in a statement, noting that union members, including the CGT secretary general, had been tear-gassed.

"This current scenario, scandalous and unprecedented, is unacceptable in our democracy," the union said.

The protest comes nearly a week after leaders of the Yellow Vest anti-government movement dismissed a package of measures, including tax cuts worth around 5 billion euros ($5.58 billion), announced by President Emmanuel Macron with the aim of quelling the protests.

The Yellow Vest protests, named after the high-visibility safety jackets worn by most of the demonstrators, started in mid-November in protest against a planned increase in fuel prices. The government cancelled the plan, but the protests continue on a national scale, reflecting widespread dissatisfaction in the French society.

Security was deployed across the capital on an "exceptional scale" on Wednesday amid calls for turning Paris into "the capital of rioting".

Authorities are gearing up for the arrival of some 2,000 anti-capitalist youths dressed in black and wearing face masks, often known as black blocs, from France and across Europe.

Some 200 people have been arrested on Wednesday, according to police.