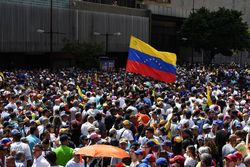 By imposing sanctions on Venezuela’s top diplomat, Jorge Arreaza, the United States is seeking to disrupt the country’s diplomatic contacts, including within the United Nations framework, the Russian foreign ministry said in a statement on Friday.

RNA - "Again and again, Washington has been demonstrating strong rejection of negotiations as a means of settling the situation," the foreign ministry noted, according to TASS.

"In essence, the United States deliberately eliminates all opportunities for a civilized dialogue with the legitimate government in Caracas, seeks to disrupt their international contacts, including in the UN headquarters in New York," it added.

The foreign ministry announced that it viewed such actions as "a demonstration of an increasingly aggressive US policy to discredit the international diplomacy and replace it with dictate".

Russian diplomats urged the United States to stop the policy of blackmail and return to the international legal field.

"We call on the United States to eventually return to the international legal field, stop the policy of blackmail and provoking tensions in Venezuela from the outside. The global community should assist in creating an inclusive intra-Venezuelan dialogue. There is no alternative to this," the foreign ministry stated.

On Friday, April 26, the US Department of the Treasury added Arreaza, Venezuelan foreign minister since 2017, to its sanctions list.

Over the past years, Venezuela has been experiencing an acute political and economic crisis, accompanied by the devaluation of the national currency. According to the estimates of the UN High Commissioner for Refugees and the International Organization for Migration, more than 3.4 million people have already left the country. The International Monetary Fund, in its April report, forecasts the inflation rate in Venezuela in 2019 and 2020 to be at the level of 10 mln percent.

According to Fars News Agency, the situation in the country became even more complicated when, in late January, Juan Guaido, Venezuelan opposition leader and parliament speaker, whose appointment to that position had been cancelled by the country’s Supreme Court, declared himself interim president at a rally in the country’s capital of Caracas.

Several countries, including the United States and Lima Group members (excluding Mexico), recognized him as an interim president. President Nicolas Maduro, in turn, blasted the move as a coup staged by Washington and said he was severing diplomatic ties with the US.

Days of Foreign Intervention in Latin America Is Over