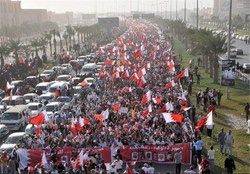 Bahraini police have detained a journalist, who works for a pro-government daily newspaper, after he criticized the media’s “misinformation campaign” surrounding the devastating Saudi-led war on Yemen.

RNA - Ibrahim al-Shaikh, a writer with Akhbar al-Khaleej, was arrested on Monday after he authored an article which said journalists and analysts had been peddling lies about advances by Saudi-led coalition forces in war-torn Yemen, Arabic-language Lua Lua TV reported.

The journalist has bee previously known for his support of the bloody campaign and often favorable coverage for parties to the coalition, including Bahrain.

The public prosecutor’s office in the capital Manama accused Shaikh of “spreading false news and rumors in time of war.” It alleged that his actions could have “damaged [Bahrain’s] national security and public order.”

Shaikh is not the first person imprisoned for criticizing Manama’s participation in the brutal war, which has left tens of thousands of Yemenis dead and caused “the world’s worst humanitarian crisis” in the already poorest Arabian Peninsula state.

Leading a coalition of vassal states, Saudi Arabia invaded Yemen in March 2015 in an attempt to reinstall former president Abd Rabbuh Mansur Hadi, who had resigned amid popular discontent and fled to Riyadh.

The regime in Manama has been relying on the Saudi military’s support in its campaign of suppression against opposition and political activists since 2011, when a popular uprising began against the ruling Al Khalifah dynasty.

In a separate development on Monday, the Bahrain Mirror news website reported that 298 Bahraini citizens had been stripped of their nationality in 2018, as part of the crackdown campaign against Bahraini activists, making it a record year for citizenship revocations.

Citing statistics presented by organizations and news reports, the news website said authorities had revoked the citizenship of about 804 Bahrainis since 2011.

The year 2018 also witnessed a rare incident, in which 115 people were stripped of their citizenship in a single trial.

Amnesty International condemned the “ridiculous” trial as “one of the most severe rulings yet, and is further proof that the Bahrain authorities have no regard whatsoever for international fair trial standards.”

Monday’s report further said Bahraini authorities had not only withdrawn the citizenship of political defendants in trials, but had deprived all children, whose fathers were imprisoned, of birth certificates and passports.

In 2018, Manama revoked the citizenship of Bahrain’s most prominent Shia cleric Ayatollah Sheikh Isa Qassim, who was under house arrest before leaving for London to receive emergency treatment.