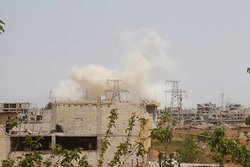 Russian fighter jets launched massive air raids on key military positions of Tahrir al-Sham al-Hay'at (the Levant Liberation Board or the Al-Nusra Front) in Idlib province, Arabic-language media sources said.
RNA - Russia's air force pounded the positions and movements of Tahrir al-Sham in the surrounding areas of the towns of Basanqoul and Urum al-Jawz near Ariha city in Southern Idlib 14 times, the Arabic-language service of the Russian Sputnik News Agency quoted a military source as saying.

The Arabic-language service of the Russian Sputnik News Agency quoted a military source as saying that the Russian air force pounded the positions and movements of Tahrir al-Sham in the surrounding areas of the towns of Basanqoul and Urum al-Jawz near Ariha city in Southern Idlib 14 times.

The source pointed to the monitoring of movements of the terrorists in Southern Idlib, and said that several military points as well as arms caches and military equipment of Tahrir al-Sham terrorists were destroyed during the attacks.

It also said that several military vehicles of the terrorists were also destroyed, killing and injuring a number of militants.

The source noted that Tahrir al-Sham terrorists were preparing to attack the military positions and towns under the control of the Syrian Army while the terrorists were sending military equipment and weapons to Southern Idlib.

The local sources, meantime, said that tens of terrorists, including foreign militants from China, Belgium, Saudi Arabia, Egypt and Libya have been killed and injured during the attacks.

A large number of civilians residing in al-Rukban Refugee Camp in the US-controlled al-Tanf region in Homs province have fled the area as tens of militants have applied for amnesty, the Arabic-language media reports said.

About 1,000 civilians, most of them children and women, residing in al-Rukban refugee camp which is under control of the US Army and its allies arrived in Jaligham crossing to reach areas under the control of the Syrian Army after fleeing al-Tanf region, the Arabic-language al-Watan newspaper reported.

According to Fars News Agency, the source noted a sum of 3,300 civilians have managed to flee al-Tanf region since February 19, and said that the Syrian officials in Homs province have given amnesty to tens of young militants who have fled the camp in Homs province.

Meanwhile, the civilians who have fled al-Rukban Camp have pointed to their very difficult and deteriorating conditions in al-Rukban refugee camp, and said that the terrorists have stolen the humanitarian aids dispatched for them to al-Rukban Camp.

The Ankara government is continuing its efforts to annex the occupied areas in Afrin in Northwestern Aleppo to Turkish soil, media reports said.

The Ankara-backed National Liberation Army terrorists have removed all the communication towers of Syria in Afrin city and its surrounding areas in Western Aleppo to replace them with Turkey's towers, the Arabic-language Moraseloun news website reported.

It noted that the Turkish government is trying hard to implement the Turkish laws and regulations in the Ankara-controlled areas in Northern Syria as it has imposed using Turkish currency in some regions.

Meantime, local sources in Afrin reported that in fierce clashes between Jbahat al-Shamia terrorists and Ankara-backed Sultan Murat militants have been ongoing in Afrin.

The sources also said that the Ankara-backed militants have asked for $3,000 to release a civilian arrested in Jaghalou village in Sheikh Hadid region of Afrin.