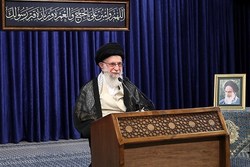 The Supreme Leader of the Islamic Revolution said ‎the enemy’s long-term plot against Iran is forcing the country into bankruptcy, while the ‎other hostile objective is to undermine the Islamic Republic’s support for the Islamic Resistance Front.‎

RNA – The Supreme Leader of the Islamic Revolution, Ayatollah Sayyed Ali Khamenei, said ‎the enemy’s long-term plot against Iran is forcing the country into bankruptcy, while the ‎other hostile objective is to undermine the Islamic Republic’s support for the Islamic Resistance Front.‎

Ayatollah Khamenei spoke directly to the people of Iran on Friday on the occasion of Eid al-‎Adha.‎

In the speech, broadcast live on national TV, the Leader warned that the adversaries are ‎after Iran’s economic collapse.‎

‎“The United States government needs to create enemies in order to further its goals. ‎Sometimes they introduce Iran as the enemy, sometimes China, sometimes Russia. But the ‎United States establishment’s biggest enemy is the American people, and they will eventually ‎bring down the current United States system,” Ayatollah Khamenei underlined.‎

‎“In mentioning negotiations with Iran, this old man who is the current POTUS seeks personal ‎benefits for elections, etc. Of course, the United States political system seeks to eliminate ‎Iran’s defense capabilities and regional authority using negotiations, which will definitely not ‎happen,” the Leader underscored.‎

‎“Of course, that doesn’t mean we rely on our international friends. No! We rely on God and ‎on ourselves. During Saddam’s war on Iran, both the Eastern and Western blocs were ‎against Iran and supported Saddam. We resisted for eight years and finally struck down ‎Saddam,” the Leader stated.‎

‎“One of the benefits of United States sanctions has been a decrease in our reliance on selling ‎crude oil and moving toward a non-oil economy. I had repeatedly asked for this from ‎various administrations, but it had rarely been realized. Now, due to lessening crude oil sales, ‎this is happening,” the Leader went on to say.‎

As regards Iran’s nuclear program, Ayatollah Khamenei said, “Nuclear energy is a nation’s ‎certain need in the future. In a few years, we will need at least 30,000 MW of electricity ‎produced by nuclear energy. How can we get this? By begging the United States and ‎Europe? We should think about the future today. We can’t achieve this in just one or two ‎years.”‎

On the plans to deal with the sanctions, the Leader emphasized, “Yes, sanctions create ‎problems. But, the United States’ goals in sanctions against Iran have not been and won’t be ‎realized. They have admitted to this in their think tanks. Astute Iranians have taken ‎advantage of sanctions and used them to increase national self-reliance.”‎