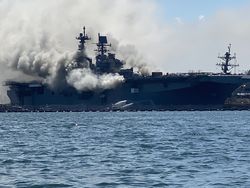 So we just had an incident off the coast of San Diego, California: The Bonhomme Richard naval ship, which normally has about 1000 sailors assigned to it, just caught fire with 160 people aboard. And apparently, nearly 60 people had minor injuries such as heat exhaustion and smoke inhalation, but nobody died.

Rasa - So we just had an incident off the coast of San Diego, California: The Bonhomme Richard naval ship, which normally has about 1000 sailors assigned to it, just caught fire with 160 people aboard. And apparently, nearly 60 people had minor injuries such as heat exhaustion and smoke inhalation, but nobody died.

And so when we explore the possibilities for what may have caused this fire, I think we can rule out an Israeli false flag because if the Israelis had done it, they would have done their best to murder all 1000 sailors assigned to the ship. They would have waited till it was full and then they would have tried to blow it up or attack it with gunboats like they did with the USS Liberty in 1967. So I think the Israelis probably weren't behind this one. But one never knows.

It's quite possible that this is another Gulf of Tonkin or “Remember the Maine” type of incident. It's conceivable that it will be blamed on a cyberattack from whoever the US wants to escalate against. That easily could be Iran, it could be Russia, it could even be China, we don't really know. This type of mysterious event is perfect for being blamed on a cyberattack because nobody can prove that kind of thing.

Tt's very easy to speculate about what happens in cyberspace. We saw that with the Seth Rich-leaked Hillary Clinton tapes that had a big effect on the last presidential election here. There was a huge dispute about where that leak really came from. It probably was Seth Rich who was a pro-Bernie Sanders Democratic staff member who was very angry about the way Hillary Clinton stole the election, and he downloaded that and gave it to WikiLeaks on a thumb drive, but because the US government could just make up whatever stories it wants about what happens in cyberspace, they invented a preposterous and impossible story that it had been hacked by Russians.

So they could do something like that again here. One never knows.

It's also possible that we're witnessing some kind of civil war within the US military over the violent suppression of the recent Black Lives Matter protests. It could be angry pro-Black Lives Matter sailors who were behind thi, or some pro-BLM faction in the military, or it could have been the opposite faction, the angry white nationalist contingent.

So we'll wait and see what the propagandists in the corporate-controlled mainstream media infiltrated by Operation Mockingbird, the CIA media-controlled operation, have to say about this fire, and then from there, we can start to speculate with a little bit more evidence behind us as to what really happened.

This naval attack happening close to the same time that the Taliban has shut down an American plane in Afghanistan suggests that it's possible that the American Empire is starting to lose its peripheral battles. It's unlikely that the same forces are behind this although it wouldn't surprise us if the usual suspects, the US government and its mockingbird media, tried to blame the Russians for both. They've blamed the Russians for supposedly offering the Taliban bounties to kill American occupiers in Afghanistan.

And so maybe they'll try to blame the Russians for offering bounties to shoot down American planes, or even helping the Taliban shoot down the plane. That's always possible. Or they might somehow try to blame Iran or China, although that would be quite preposterously implausible.

In any case, the US military has become something of a paper tiger. It's huge, I forget what the budget is now, but I think it's sort of in the 700/800 billion range officially and much higher than that unofficially with all of the Black Ops money coming in from the CIA's control of the global drug trade and US military drug smuggling out of occupied Afghanistan. So they have a lot of money, but they use it to line their own pockets, rather than build effective fighting forces.

So the world is no longer terrified of the US military. And that's why we have more and more countries standing up against the US, whether it's Russia, which drew the line in Syria and Ukraine, or whether it's China, which just essentially stood up against the US in the most powerful way it ever has in the history of Communist China and made a huge deal with Iran.

And of course, Iran has also been resisting the US, even in the face of Donald Trump's neocon administration of fanatical anti-Iran zealots doing all kinds of crazy provocations against Iran, and Iran hasn't backed down.

So the world is not scared of the US military any longer, which means that we are very quickly finding ourselves in that multipolar world that the analysts have been projecting.