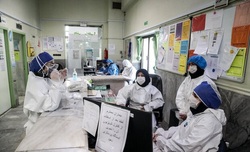 Iran’s Health Ministry Spokesman Kianoush Jahanpour said on Tuesday that 92,584 people have been infected with COVID-19 virus, of whom 5,877 have unfortunately lost their lives.

RNA - In the past 24 hours, 1,112 new affected cases have been detected, increasing the total number of infections in Iran to 92,584, said Jahanpour.

He added that unfortunately, 71 coronavirus patients have died in a single day, bringing the total death toll to 5,877.

The Iranian official noted that 2,983 cases are in critical condition while 72,439 have recovered and been discharged from medical centers