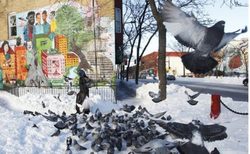 Adhan echoes across Minnesota, US, from the loudspeakers of a mosque for the first time.‎

RNA – After Adhan echoed across the United Kingdom and continental Europe, the call to ‎prayer (adhan) echoed across ‎Minneapolis and the neighbouring communities on Thursday ‎ahead of the holy month of Ramadan. The ‎Adhan again broadcasted on Friday. The practice ‎will continue throughout Ramadan five times a day to ‎facilitate the Muslim communities.‎

Ramadan begins in the midst of the state’s stay-at-home order. Minneapolis Mayor Jacob ‎Frey says the ‎city worked with leaders in the Muslim community to have the “call to prayer” ‎broadcast by speaker ‎five times a day in the Cedar-Riverside neighbourhood. “We want to ‎make sure that people can practice ‎their religion, yes, but it can’t conflict with the ‎overarching public health guidelines,” Frey said. “It ‎allows people to stay together even ‎when they’re praying apart, and we want to make sure that we’re ‎doing proper social ‎distancing and physical distancing in particular.”‎

Cedar-Riverside has a large Muslim population. Leaders hope the sound to prayers will be a ‎connector ‎for all who feel isolated from community because of COVID-19, according to CBS ‎Minnesota. The simple, ‎short call – known as the Adhan – marked an historical moment for ‎Minneapolis and major cities across ‎the United States, community members said. While the ‎Adhan is commonly broadcast throughout the ‎Middle East, North Africa and other places, for ‎many Muslims in the US, it is only heard inside mosques ‎or community centres.‎

‎“There’s definitely a lot of excitement,” said Imam Abdisalam Adam, who is on the board of ‎the Dar al-‎Hijrah mosque, from where the adhan will be broadcast. “Some people see it as ‎historic,” Adam told Al ‎Jazeera. “To the point … that they’re not doing it, able to see it in ‎their lifetime.” Imam Sharif Mohamed ‎of the neighbourhood’s Dar al-Hijrah Mosque said the ‎broadcasts are a way to remind the faithful that ‎they “are not alone,” even as they’ve spent ‎weeks inside their homes.‎

‎“This is a re-connection, a calming, to give people assurance that we are with you,” said ‎Mohamed. ‎‎“That’s what we try to achieve.” Minneapolis is a little different, because the ‎prayers will be broadcast ‎in the heart of a large metropolitan area, said Jaylani Hussein, ‎director of CAIR-Minnesota. “This is a ‎unique opportunity,” Hussein said. “It’s a reminder to ‎everyone that we are all in this [pandemic] ‎together.”‎

Hussein acknowledged that the daily broadcasts could fuel anti-Muslim sentiments. But those ‎‎sentiments already exist, he said. The broadcasts are a public show of support to the ‎Muslim ‎community, in particular to the elderly and the sick who will be comforted by the ‎broadcasts, he said. ‎‎“Just as we have historically allowed churches to call out for prayers ‎using a bell, this is a continuation ‎of the same freedom that other faiths have had,” Hussein ‎said, Star Tribune reported.‎

The RSS organization is similar to Wahhabism and Zionism