The RSS organization is similar to Wahhabism and Zionism 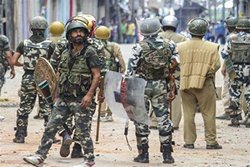 Dr. Ali Alavi‎ described the activities of the Rashtriya Swayamsevak Sangh (RSS) ‎organization ‎as similar to ‎Wahhabis and Zionist in its thinking and actions.‎

RNA – An academic conference entitled “Developments in the Indian Subcontinent with an ‎‎‎‎‎‎‎Emphasis on the Kashmir Issue” was hosted by Rasa News Agency at the headquarters ‎‎of ‎‎‎‎the ‎news agency in Qom. ‎

Speaking at the conference, ‎Dr. Ali Alavi, a political expert on Kashmir, said, “Kashmir is a ‎wounded paradise. The actions of the Indian government aren’t only allocated for Jammu ‎and Kashmir but include other states as well but the reason for the heavy pressure and ‎suppression that has taken place in Kashmir is because the majority of the people are ‎Muslim.”‎

His Eminence described the activities of the Rashtriya Swayamsevak Sangh (RSS) ‎‎organization as similar to Wahhabis and Zionist in its thinking and actions and said, “The ‎Indian army is now allowed to shoot anyone who leaves Kashmir, whether they have a ‎weapon or not and they can’t be tried in any court. The Indian government seeks to take ‎the lands and honour of the people of Kashmir.” ‎

Dr. Alavi has stated that it’s not the intention for any Muslim in Kashmir and India to be ‎relocated but the Indian government has blocked roads, the internet, telephone and any ‎communication with Kashmir and has banned the holding of Friday and Eid prayers and the ‎broadcasting of the adhan (call to prayer) and ceremonies from mosque loudspeakers.‎
‎ ‎
The political expert on Kashmir added that most of the political and religious leaders in ‎Kashmir have been detained, saying, “All the actions taking place in Kashmir were directed ‎by Israel. With the prolonged martial law and the media ban, it’s possible that there will be a ‎great massacre in Kashmir.”‎

He said that under the new law, Muslims present in India must prove that they are of Indian ‎origin and that their origin goes back to 1951 and if it doesn’t, they must leave the country. ‎The Indian government also doesn’t allow a census to be taken in Kashmir, so we have no ‎real statistics on Kashmiri Muslims.‎

Dr. Alavi ‎stressed that the only solution to is as resistance and noted, “The enemies’ plan ‎was to start conflicts in Kashmir and then drag it to Pakistan and Iran.” ‎