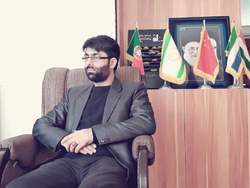 Sayyed Hashimi emphasized, “The United States sanctions against Iran are unfair, cruel and are against the basic principles of freedom and moral values.”

RNA – In an exclusive interview with Rasa News Agency, Sayyed Karar Hashimi, a Kashmiri seminarian in Qom, raised his voice against the illegal sanctions imposed by the United States against Iran said that war doesn’t produce justice but rather it produces sorrow, destruction and hate.

He emphasized, “The United States sanctions against Iran are unfair, cruel and are against the basic principles of freedom and moral values. The Iranian people are worth acknowledging as they are facing untold sufferings amid heavy sanctions by the United States and its allies.”

Sayyed Hashmi said that the world must oppose the unilateral sanctions imposed by United States against Iran and added, “Despite all of the tactics and illegitimate force employed against Iran to coerce it to surrender, the United States has completely failed in all of its objectives.”

He added, “On the other hand, the Supreme Leader of Islamic Republic, Ayatollah Sayyed Ali Khamenei, slapped the United States by rejecting its offer to help the Iranian people amid the COVID-19 (Coronavirus) pandemic.”