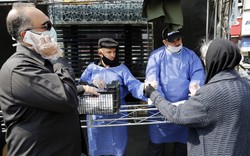 The coronavirus continues to spread rapidly in Iran, and health workers are working extra shifts to contain the outbreak, but, aside from the virus itself, they have to grapple with another challenge, the US sanctions.

The battle against the virus has sapped Iran’s healthcare resources, and the US sanctions have made it impossible for Iran to import any new medical supplies. Iranian medical staff are now facing a lack of basic supplies, such as protective gears, masks and disinfectants.

US sanctions do not directly target Iran’s medical sector, but embargoes imposed on Iran’s banking system have discouraged many pharmaceutical firms to trade with Iran, since Tehran cannot easily pay them.

Many medical experts and rights groups have urged the US to exempt humanitarian supplies such as food and medicine from the list of its sanctions.

The coronavirus has now contaminated over 160 countries. Iran is the third worst-hit after China and Italy, with the death toll exceeding 1,000.

Iran has begun producing its own face masks and sanitizers to partly assuage the effects of the US sanctions.

The country has also been working to produce diagnostic kits to accelerate testing for corona.

Medical professionals in Iran believe that sanctions have played a deadly role in aggravating the outbreak of the coronavirus in Iran, with doctors being pushed into the edge of self-sacrifice to stifle the spread of the disease. Now as corona has become a crisis without borders, aid groups say it’s not the right time for political disputes, and instead, all leaders need to join hands in a united front against the outbreak.