Selling Arms to Saudis Is Crime Against Humanity 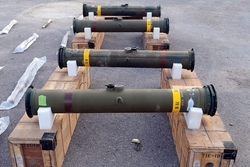 The United Nations should call on the US and its allies to stop selling weapons to Saudi Arabia and its coalition partners who have waged an unjustified war on Yemen. It is crime against humanity under international law and UN Charter.

RNA - The UN has a responsibility to call on the US and other Western governments to cease selling arms to the warmongers and urge the international community to do more to stop nations actively producing and selling weapons in the conflict zones of the Middle East. The Western governments have now issued many permits to arms manufacturers to export weapons or military technology to Saudi Arabia and its regional partners.

They have been in near-perpetual conflict for nearly ten years now, not just with Yemen but also Syria. The UN has already warned that these conflicts are causing an unprecedented humanitarian crisis in the region, displacing millions of people and putting millions of civilians at risk.

The world body is currently monitoring the deteriorating human rights situation in Yemen and Syria that has been the product of the war launched by the Saudis or their proxy forces. The UN had warned the multiple failures of the states – in administration, justice and security – are facilitating mass violence with impunity in these war-torn countries. The time is now to tell them stop exporting arms to their terror proxies as well.

The diffusion of arms in the region should be considered a crime against humanity, and the world community should urge the world, including the UN Security Council, to do more to pressure the Western nations transferring arms to the terrorist groups.

What solutions exist to stop the spread of weapons, end violence and its tragic consequences in Yemen and Syria, which actively poses a threat to regional peace and security, results in millions of deaths and refugees and precipitates humanitarian catastrophes?

The international community, notably the UN Security Council and the European Union, must hold Riyadh and its allies which are actively aiding and weaponizing terrorist groups accountable, and pressure them to cease these practices in the conflict zones, including Iraq. The diffusion and transfer of weapons by the US must also be considered to be a crime against humanity in Syria.

The US government claims its export licences are only issued after thorough assessments on whether arms will be used to breach human rights or any of US international obligations. If there is an overriding risk that the weapons could be used to commit or facilitate a serious violation of humanitarian law, the US says it will not issue an export permit.

The US has, however, refused to say what it is exporting, to whom, and for what purpose. Requests under freedom of information law for such details have always been refused. The US knows that it is violating human rights law.

According to Fars News Agency, Human Rights Watch, Oxfam and Save the Children have all called for greater transparency on US arms sales. They have also criticized the US and its allies for training and fuelling Saudi warplanes that bomb schools, markets and hospitals in Yemen.

The UN should put an end to this criminal practice, as well as arms exports to the Middle Eastern countries. In this volatile region, the intent behind the exports of US and Western weapons and the practice of violence by terror proxies has never been democratic in nature, much less for freedom and establishment of peace.

Today, millions of US weapons circulate in Afghanistan, Iraq, Syria and Yemen, including heavy machine guns, rocket propelled grenades, and surface to air missiles. We all know that they are being used exclusively against civilians and those who are fighting the Saudi-Israeli-American terror proxy groups. The time has finally arrived for the UN to put a cap on this criminal practice and to save lives.

5 years of Yemen war: Iran takes US to task for complicity in Saudi crimes