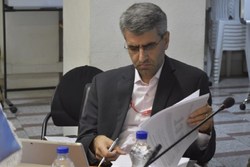 Permanent representative of Iran to the United Nations Office in Geneva Esmayeel Baqayee Hamaneh condemned Washington’s “hypocritical” show of sympathy with the people of his country suffering from the coronavirus outbreak, reminding that the US is tightening its anti-humanitarian sanctions.

RNA - Speaking in the 43rd session of the UN Human Rights Council (HRC) on Tuesday, Iran's envoy to the UNOG Baqayee Hamaneh pointed to the exacerbation of US anti-humanitarian sanctions against Iran and described its claim of sympathy for Iranians as “hypocritical and discredited”.

He requested a minute of silence for honoring victims of the novel coronavirus in various parts of the world including Iran before announcing the position of the Islamic Republic towards the claims and accusations raised by UN special human rights rapporteur.

While criticizing the continuation of fanatical approaches of some countries to the issue of human rights in Iran, Baqayee Hamaneh termed the human rights mechanisms for the exertion of political pressure against target countries as a great injustice in the Human Rights Council and called for the cessation of destructive approaches by sponsors of anti-Iranian resolutions.

Turning to the exacerbation of US anti-humanitarian sanctions against the Islamic Republic of Iran which has spent all its facilities to combat coronavirus and protection of health of its citizens, he added, “some sponsors of anti-Iranian resolutions comply with the US sanctions imposed against Iran actively," and described the claim of sympathy of this group of countries for human rights in Iran ‘hypocritical’.

Elsewhere in his remarks, Baqayee Hamaneh pointed to the US assassination of Iran’s top commander Lieutenant General Qassem Soleimani as a clear violation of all international rules and principles and added, “Martyr Soleimani was the greatest defender of human rights and human dignity who saved millions of people under the yoke of the ISIL terrorist group and paved the way for Iraqi and Syrian people to regain their dignity which had been undermined under the dominance of the ISIL.”

In a tweet on Saturday, Iranian Parliament Speaker's Special Advisor for International Affairs Hossein Amir Abdollahian denounced American officials’ hypocrisy in claiming readiness for help to counter the coronavirus, stressing that Tehran is still unable to import medical needs because of the US sanctions.

"The US Treasury does not allow the imports of Iran's purchased medicine and medical equipment for treating coronavirus patients in the country," Amir Abdollahian wrote.

"US officials are clearly lying and there has been no suspension of sanctions," he added.

"They have targeted Iran and the Iranian people," Amir Abdollahian noted.

Earlier on Saturday, Iranian Foreign Minister Mohammad Javad Zarif called upon the international community to break its silence and inaction in regard to US President Donald Trump’s malevolent attempt to increase Iranians’ sufferings amidst a coronavirus outbreak in the country.

“Trump is maliciously tightening US' illegal sanctions with aim of draining Iran's resources needed in the fight against COVID19—while our citizens are dying from it,” Zarif tweeted, lashing out at Washington for its politicized and inhuman approach to the spread of coronavirus in the world.

“The world can no longer be silent as US Economic Terrorism is supplanted by its Medical Terrorism,” the top diplomat urged the international community to not remain silent in the face of the US’ savagery.

The Iranian embassy in Belgium, in a statement issued on Saturday, hailed the selfless efforts of compatriot doctors and nurses in their fight against the outbreak of coronavirus, highlighting the importance of the role played by medical personnel in the face of the US inhuman sanctions.

In a tweet on Saturday, Secretary of Iran’s Supreme National Security Council (SNSC) Ali Shamkhani blasted the US sanctions which hinder his country’s efforts to fight against the coronavirus.

“The virus of sanctions and disloyalty is threatening the international safety and security more than coronavirus,” Shamkhani wrote on his Twitter page.

He referred to the US offer for cooperation and assistance to Iran in battle against the coronavirus, and said such a claim “can only be verified by the US implementation of its legal commitments under the nuclear deal”.

The United States, which has had no diplomatic ties with Iran since 1980, pulled out of a landmark nuclear deal with the country and reimposed crippling sanctions in 2018.

The US State Department said last week it had formally told Iran of the United States’ willingness to assist in unspecified ways through a message sent via Switzerland, which represents US interests in Tehran.

Iranian Foreign Ministry Spokesman Seyed Abbas Mousavi lashed out at US Secretary of State Mike Pompeo for his anti-Tehran accusations in regard to coronavirus epidemic, adding that such kind of approach is an outcome of Washington’s reliance on deception and misinformation.

“Point a finger and there are 3 more pointing back at you; only an administration infected with acute mismanagement, deception and lies could be so hideous to level senseless accusations against Iranians who're sacrificially struggling to shield humanity against COVID19 pandemic,” wrote Mousavi in a Saturday tweet.

Mousavi questioned the US handling of the coronavirus outbreak by releasing a video showing Pompeo facing questions from a lawmaker skeptical about the administration's response to the coronavirus threat in a hearing before the House Foreign Affairs Committee.

According to Fars News Agency, Trump has said the US is willing to help the Iranians with the problem, adding that “all they have to do is ask.”

Pompeo had also claimed during a House hearing that the Islamic Republic did not have a solid healthcare infrastructure and that the US had offered to help it with the coronavirus response.

Iran is currently battling one of the world's deadliest outbreak of the coronavirus outside China, where it originated.

US Administration Infected with Lies