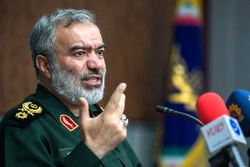 Lieutenant Commander of the Islamic Revolution Guards Corps Rear Admiral Ali Fadavi announced that the IRGC commander has held a meeting with trade and economic officials to decrease the impacts of coronavirus epidemic on businesses in Iran.

RNA - “A meeting was held in the presence of the IRGC commander and the officials of different bodies at Sarallah base of the IRGC in Tehran on Sunday and good decisions were made, including remitting the rents of the places owned by Mostazafan Organization for two months,” Rear Admiral Fadavi said on Monday.

He also underlined cooperation and interaction between the IRGC and Iran’s headquarters to fight against coronavirus which acts under the health ministry’s supervision.

In relevant remarks last Monday, Head of Baqiyatallah University of Medical Sciences in Tehran, which works under the supervision of the Islamic Revolution Guards Corps, Alireza Jalali said that the IRGC had activated all hospitals special to its staff and their family members to treat the coronavirus patients across the country.

“(After the outbreak of coronavirus) a base named Shafa (healing) was formed under the command of IRGC Deputy Commander for Coordination Rear Admiral Ali Fadavi for coordination among the universities of medical sciences,” Jalali told FNA.

He explained that one of the most important measures of the base is integrating all medical entities supervised by the IRGC, adding that the IRGC has sent the needed equipment for establishment of field hospitals to Qom, Gilan, Isfahan and several other cities.

“All hospitals active under the supervision of the IRGC across the country are on alert and ready to give services to the patients,” Jalali said.

Globally, more than 110,000 people have been diagnosed with COVID-19 with over 3,800 deaths so far, the vast majority of them in China where the virus originated late last year.

The coronavirus is spreading in the Middle East, Europe, US and other parts of the world, while parts of China begin to lower their emergency response level as the number of new cases reported there continues to slow.

Authorities across the United States reported 500 cases of coronavirus and 22 deaths as of Sunday.

As of Sunday, the death toll from the coronavirus outbreak in Iran rose to 194 with 6,566 confirmed cases.

Some 2,134 patients infected by the coronavirus have so far recovered from the disease.

Iranian Health Minister Saeed Namaki announced last week that a new national mobilization plan would be implemented across the country to fight against the coronavirus epidemic and more effectively treat patients.

According to Fars News Agency, Namaki said that the number of medical laboratories to test coronavirus infection has reached 22, and will increase to 40 soon.

US Administration Infected with Lies

Iran to Win Battle against Coronavirus