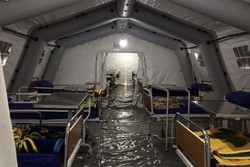 A field hospital whose construction was underway in the Northern city of Rasht in Gilan province in the past few days by the Islamic Revolution Guards Corps (IRGC) is now ready to be used for treatment of patients infected with COVID-19 virus.

RNA - The commander of the IRGC Navy’s medical unit said that the field hospital is equipped with 74 beds for now and it can be increased to 120 beds if needed.

Also, the deputy head of the medical center of the IRGC Qods Base in Gilan province said that all clinics of the base in the province are ready to give services to people in coordination with Gilan’s University of Medical Sciences.

“The IRGC Ground Force ranks first in the country and even West Asia in area of mobile treatment systems and centers,” General Akhavan told FNA.

He added that Iran's IRGC Ground Force plans to stand among the 5 pioneering states in the world in rapid and precise launch of treatment systems by 2026.

General Akhavan said that at present, the IRGC, upon a demand raised by the health ministry, has established a field hospital in the Central city of Qom, one of the epicentres of coronavirus in Iran, with 100 beds, noting that a similar treatment center with 60 beds is due to be set up in the Central city of Kashan.

“In addition to normal hospitals, we have 10 field hospitals which are ready to be dispatched (to COVID-19 virus-infected regions),” the IRGC medical official said.

He added that all modern war units of the IRGC Ground Force are now at the service of the health ministry to disinfect the contaminated areas, including Qom city.

Also last week, Commander of the Islamic Revolution Guards Corps Ground Force Brigadier General Mohammad Pakpour announced that the IRGC had formed a biological defense base to fight against the epidemic of COVID-19 virus infection in Iran.

“All modern warfare units of the ten bases of the IRGC Ground Force are standing on full alert and a biological defense base has been set up,” General Pakpour said.

He added that the microbiology and virology experts and specialists of the IRGC Ground Force have also been sent on missions in areas contaminated with coronavirus.

General Pakpour also said that the IRGC has mobilized several teams to supply sterilizing materials and disinfect hospitals and streets.

Globally, more than 114,000 people have been diagnosed with COVID-19 with over 4,000 deaths so far, the vast majority of them in China where the virus originated late last year.

The coronavirus is spreading in the Middle East, Europe, US and other parts of the world, while parts of China begin to lower their emergency response level as the number of new cases reported there continues to slow.

Authorities across the United States reported over 700 cases of coronavirus and 26 deaths as of Monday.

On Monday, the death toll from the coronavirus outbreak in Iran rose to 237 with 7,161 confirmed cases.

Some 2,394 patients infected by the coronavirus have so far recovered from the disease.

Iranian Health Minister Saeed Namaki announced last week that a new national mobilization plan would be implemented across the country to fight against the coronavirus epidemic and more effectively treat patients.

According to Fars News Agency, Namaki said that the number of medical laboratories to test coronavirus infection has reached 22, and will increase to 40 soon.