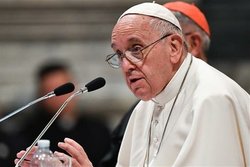 Pope Francis has hit out at US President Donald Trump's so-called deal of the century on the Israeli-Palestinian conflict, saying that 'unfair and inequitable solutions' would only be a prelude to new crises in the region.

RNA - "Nor can we overlook the still unresolved conflict between Israelis and Palestinians, with the danger of inequitable solutions and, hence, a prelude to new crises," Francis said.

The leader of the Catholic Church made remarks on Sunday in the southern Italian port city of Bari, where he traveled to attend a meeting of bishops from all countries in the Mediterranean basin.

Francis also lamented the many areas of war and conflict, including in the Middle East and Northern Africa.

"The Mediterranean region is currently threatened by outbreaks of instability and conflict, both in the Middle East and different countries of North Africa, as well as between various ethnic, religious or confessional groups," he added.

Among the prelates gathered for his speech in Bari’s Pontifical Basilica of St. Nicholas were churchmen from the Balkans, Jerusalem al-Quds and Algeria.

It was the first time the pope has spoken in public about the Israeli-Palestinian conflict since Trump announced the plan on January 28.

The pope expressed concern in 2018 when the United States announced the relocation of its embassy from Tel Aviv to the occupied Jerusalem al-Quds, saying the city's "status quo" should be respected.

Francis called for all to honor UN resolutions on the city.

Defying international outcry, Trump announced the general provisions of the plan he calls “the deal of century” at the White House with the Israeli premier at his side.

Within just hours after the announcement, Trump’s proposed deal aroused a storm of indignation and opposition among people and politicians as well as international organizations.

The plan totally ignores the rights and demands of up to 15 million Palestinians around the world, leaving them out of a process that is expected to decide their fate and their future.

Opponents argue that the highly pro-Israel scheme offers no prescription for peace because it blatantly violates international law.

It strips Palestinians of their basic rights on a number of sensitive issues, including the state of Jerusalem al-Quds, the future borders of a sovereign Palestinian state, the return of Palestinian refugees driven from their homeland, security responsibility, as well as Israeli settlements built on occupied land.

Amnesty International has criticized the proposal as “a handbook for more suffering and abuses” in the occupied territories, urging the international community to reject measures set out in the deal in contravention of international law.

Earlier in his career, Trump even formally recognized al-Quds as Israel’s “capital,” and Syria’s Golan Heights as the Israeli regime’s “sovereign territory,” exceeding all his predecessors in terms of pro-Tel Aviv favors.

Also during his Sunday’s speech, Francis took a swipe at populist politics, in an apparent reference to Trump's policies. “It scares me when I hear some speeches by some leaders of the new forms of popularism,” he said. He also lamented that waves of refugees fleeing conflicts, climate change consequences and other adversity are “depicted as an invasion.”

"To be sure, acceptance and a dignified integration are stages in a process that is not easy. Yet it is unthinkable that we can address the problem by putting up walls," he said.