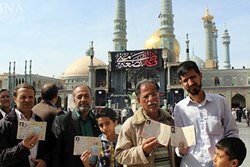 The 2020 legislative elections began several hours ago with the widespread presence of revolutionary people and the ever-present people in Qom.

RNA – The eleventh term of the Islamic Consultative Assembly and the midterm elections of the Assembly of Experts began a few hours ago with the widespread presence of the revolutionary and ever-present people in the holy city of Qom.

Despite the atmosphere available to prevent people from participating in the elections, the people of Qom, who are revolutionary and committed to wilayah (guardianship), have been present at the polling places since the polls opened this morning and have stood in the lines to act in regard to their national and religious duties.

It should be noted that 669 polling places in Qom province have been provided for voting, of which 83 are mobile and 586 are fixed branches distributed in five different parts of Qom.

It should be noted that earlier, sources of emulations and scholars had invited the honourable people of Iran to participate in the elections in separate messages and speeches.

Tags: Qom Election Iran
Short Link rasanews.ir/201sqo
Share
0
Please type in your comments in English.
The comments that contain insults or libel to individuals, ethnicities, or contradictions with the laws of the country and religious teachings will not be disclosed