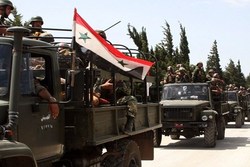 The Syrian military established full control of all areas surrounding Aleppo for the first time since 2012, putting an end to the terrorist shelling of the country’s second-largest city.

RNA - A total of 23 villages to the West and North of the city were liberated, as fighters from the Hayat Tahrir al-Sham group (formerly known as Jabhat al-Nusra) fled from their positions, state broadcaster SANA reported.

Aleppo was freed in 2016 in a joint operation by Syrian and Russian forces, but anti-government militants remained holed up in the suburbs and nearby villages.

From there, they shelled the city with mortars on a regular basis, causing widespread destruction and civilian deaths.