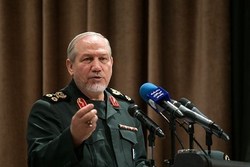 Top Military Aide to the Iranian Supreme Leader Major General Yahya Rahim Safavi underlined that the so-called 'Deal of the Century' is US President Donald Trump's last stop before full failure against the resistance front.

He also blasted certain Arab states for their support for Trump's plot, and lamented, "Leaders of certain Arab countries have accepted it and accompany the US in its policies, while none of the Palestinian groups has endorsed the plot."

Defying international outcry, Trump last Tuesday announced the general provisions of the plan at the White House with Israeli Prime Minister Benjamin Netanyahu at his side.

The scheme — which all Palestinian groups have unanimously rejected — largely meets Israel’s demands in the decades-old conflict, while creating a Palestinian state with limited control over its own security and borders.

It enshrines Jerusalem al-Quds as “Israel’s undivided capital” and allows the regime to annex settlements in the occupied West Bank and the Jordan Valley, among other controversial terms.

Palestinian leaders, who severed all ties with Washington in late 2017 after Trump recognized Jerusalem al-Quds as the capital of the Israeli regime, immediately rejected the plan, with President Mahmoud Abbas saying it “belongs to the dustbin of history.”

Thousands of Palestinians in the occupied West Bank and besieged Gaza Strip poured out onto the street in immediate condemnation of the plan.

Muslims all across the world have also expressed solidarity with the Palestinian cause and denounced the Trump's proposed plan.