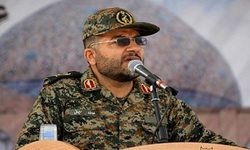 Commander of Basij (volunteer) forces Brigadier General Gholamreza Soleimani downplayed the threats posed by US President Donald Trump against Iran, saying that they are turned into opportunity by the nation.

RNA - "Any threat that US President Donald Trump poses to us will be turned into an opportunity by the Iranian nation," General Soleimani said in an interview with the Arabic-language al-Ahd news agency on Monday.

"The Iranian nation gives the enemy a lesson that will never be forgotten," he added.

General Soleimani reminded of Iran's resistance against all plots hatched by the US and Israel against the country in the past 41 years, and said, "Iran will act the same in the future too; it will stand against the arrogant US with more might and power."

He also expressed confidence that the Muslim nations will stand beside the Iranian people against the US.

In relevant remarks in December, General Soleimani had said that the US policy of maximum pressure against Iran had failed and the country's economy was improving.

"The Americans' maximum pressure policy against Iran has failed and this is a great defeat for them,” General Soleimani said.

He said that Iran’s economy was improving despite the US sanctions, adding, "Enemies seek making Iranian nation hopeless via operating psychological war and want to prove that Iran is in an economic dead-end but they are making a big mistake.”

His comments came after Iranian President Hassan Rouhani stressed inefficiency of Washington's maximum-pressure policy, and further said the US sanctions against Iran fade away.

"Certainly, the present circumstances will end and the US will sooner or later be forced to relinquish maximum pressure against Iran before or after the presidential election in the US," Rouhani said in a meeting with India’s External Affairs Minister Subrahmanyam Jaishankar in Tehran in December.

He added that under the current conditions that the US has imposed unilateral sanctions against other countries, Iran and India should endeavor to protect their ties and cooperation intact and unaffected.