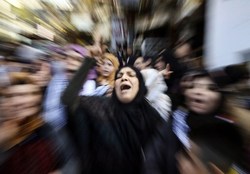 The US ‘Deal of the Century’ on ironing out the Palestinian-Israeli conflict is not fully compliant with the UN Security Council’s resolutions on the issue, Kremlin Spokesman Dmitry Peskov said in an interview with the program "Moscow. Kremlin. Putin" on Rossiya-1 TV channel.

RNA - "There is a whole number of respective resolutions of the UN Security Council," Peskov stated, adding, "It’s obvious that certain points of this plan are not in full compliance with the UNSC resolutions."

The Kremlin spokesman noted that the negative reaction of Palestine and a number of other countries to the US-proposed plan on ironing out the Israeli-Palestinian conflict raises doubts whether this plan is viable.

"We see the Palestinians’ reaction, we see the reaction of the whole number of Arab states, which show solidarity with the Palestinians in opposing this plan," Peskov said, adding that "this certainly raises doubts over its viability".

US President Donald Trump unveiled his self-proclaimed "Deal of the Century" during an event at the White House alongside Israeli Prime Minister Benjamin Netanyahu in Washington on Tuesday.

All Palestinian groups have unanimously rejected Trump's initiative that largely meets Israel’s demands in the decades-old conflict while creating a Palestinian state with limited control over its own security and borders.

It enshrines Jerusalem al-Quds as “Israel’s undivided capital” and allows the regime to annex settlements in the occupied West Bank and the Jordan Valley.

The plan also denies the right of return of Palestinian refugees into their homeland, among other controversial terms.

Netanyahu has expressed support for the deal. For his part, President of Palestine Mahmoud Abbas denounced Washington's plan, blasting it as a "conspiracy deal" that will not pass, while Hamas stressed that the plan is "not worth the ink it was written with".