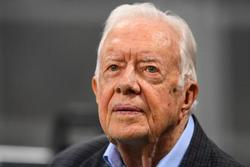 Former US president Jimmy Carter says the country’s current President Donald Trump’s self-styled initiative for resolution of the Palestinian-Israeli conflict serves instead to compromise any prospect of “peace" and violates international law.

RNA - Carter made the remarks in a Thursday statement that was carried by CNN.

"The new US plan undercuts prospects for a just peace between Israelis and Palestinians. If implemented, the plan will doom the only viable solution to this long-running conflict, the two-state solution," he said.

Trump had announced the scheme, which he has named as the “deal of the century” years ago, but had withheld its details.

He unveiled its outlines on Tuesday, saying it considers occupied Jerusalem al-Quds to be Israel’s “capital” -- although Palestinians want the city’s eastern part as the capital of their future state.

Carter reminded that the plan violated the United Nations’ repeated calls for a “two-state solution” based on the 1967 borders. Tel Aviv occupied the Palestinian territories of the West Bank and the Gaza Strip that year.

Not only did not Trump’s scheme mandate Israel to withdraw from the West Bank, but also it said the regime would be annexing the illegal settlements that it has been building on the occupied territories under the US scheme.

Carter also called on UN member states "to adhere to UN Security Council resolutions and to reject any unilateral Israeli implementation of the proposal by grabbing more Palestinian land."

Palestinians, who had already spurned the plot, repeated their opposition to it soon after Trump’s announcement.

Palestinian Authority President Mahmoud Abbas has cut his organization’s ties with Washington and Tel Aviv in response to Trump’s announcement, saying his decision followed the US and Israel's "disavowal of signed agreements and international legitimacy."