Trump deal: A prize for Israel at the expense of Palestine 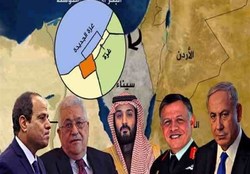 Just as US President Donald Trump is taking time off his controversial impeachment trial to unveil his much hyped-up peace plan for the Israeli-Palestinian conflict, a potentially explosive situation is unfolding in Palestinian territories where there is huge resentment among the leadership and the people towards the so-called ‘deal of the century.’

RNA - Palestinians argue that one primary flaw of Trump’s deal is that despite presumably offering a recipe for peace between Israelis and Palestinians, it totally excludes and sidelines them, as one side of any mutual agreement.

Palestinians view the deal as Washington’s seal of approval for Israel’s long-desired annexation of their territories it has been illegally occupying for decades, in total disregard for UN Security Council resolutions and the opposition by the vast majority of the international community.

The timing for the unveiling of the deal has also drawn much attention as both President Trump and Israeli Prime Minister Benjamin Netanyahu are embroiled in major national scandals. The US president is in the midst of an impeachment trial, while the Israeli premier is facing three corruption indictments.

Palestinian leaders from different factions raised their voices on Monday against the US-devised deal and stressed the need for popular resistance in the face of the American scheme which Trump prepares to unveil in the presence of Israeli leaders at 17:00 GMT on Tuesday.

Palestine has already rejected the so-called peace plan as “the slap of the century.”

The scheme is reported to be hugely biased towards the Tel Aviv regime by extending Israel’s “sovereignty” over all settlements and annexing the Jordan Valley in the West Bank.

Washington released the economic portion of its initiative during a conference last June, which was boycotted by Palestinians and supporters of the Palestinian cause against Israel’s decades-occupation.

I won’t become a traitor: Abbas

Speaking at a meeting with members of the Fatah Party’s central committee on Monday, Palestinian President Mahmoud Abbas was cited in media reports as saying that Trump “wants to impose something on us that we do not want.”

Fatah officials also quoted Abbas as saying that he “did not pick up the phone” after calls from Washington.

“I said no and I will continue to say no...We are going for difficult days and we are beginning to bear the consequences of the refusal. Resistance must be escalated at all points of friction. All young people must be encouraged,” he said.

Abbas said he had received threats over his firm opposition to Trump’s deal, but that he will not back down from his stance.

“I was told I’ll pay a heavy price for my foolish behavior. I do not have much longer to live and I will not go down as a traitor. It’s either dying like martyrs or flying the Palestinian flag on the walls of Jerusalem [al-Quds],” he added.

Abbas also instructed Palestinian security forces not to interfere with protests against the US scheme, according to the reports.

US deal will be another Nakba: Hamas

The Nakba Day (the Day of Catastrophe) is commemorated every year on May 15 to mark the forcible eviction of Palestinians from their motherland by Israel in 1948.

Barhoum also stressed that confronting “the disgraceful deal of the century” requires declaring public mobilization and stepping up resistance in various forms throughout Palestine.

He further urged Abbas to take important decisions towards opposing the initiative, among them ending security cooperation with Israel.

Abbas’ spokesman Nabil Abu Rudeineh called on all ambassadors of Arab and Muslim countries invited to the unveiling ceremony of the US plan not to attend the event, according to the Palestinian WAFA news agency.

The Palestinians consider the deal “a conspiracy aimed at undermining the rights of the Palestinian people and thwarting the establishment of the State of Palestine.”

Reports, however, suggest that Arab Persian Gulf states — which have long had secret contacts with Israel  — are likely to voice general support for the contentious US scheme, but only if it does not allow Tel Aviv to immediately annex parts of the West Bank.

So far Jordan has openly opposed the deal.

Ahmad Tibi, Israeli lawmaker from the Arab-majority Joint List political alliance, said that Trump was intervening in the Palestine issue in favor of sandal-hit Netanyahu, amid an election deadlock in the occupied territories, Al Mayadeen TV channel reported.

Anyone who supports Trump’s initiative is actually against Palestine, he added.

Mohammed al-Hindi, a member of Gaza-based Islamic Jihad’s politburo, called on people to launch a new Intifada (uprising) in the occupied territories.

He further underlined the need for an emergency meeting between all Palestinian groups on how to counter the US plan.

Meanwhile, groups based in the Gaza Strip have called on Palestinians in the blockaded coastal enclave to protest against Trump’s deal in central Gaza on Tuesday.

Separately, Abbas has called for an emergency meeting of the Palestine Liberation Organization (PLO) Executive Committee and the Fatah central committee at 17:00 GMT on Tuesday, which coincides with the plan’s release.

Hamas, which governs Gaza, is also set take part in the meeting.

“We invited the Hamas movement to attend the emergency meeting of the leadership and they will take part in the meeting,” senior Palestinian official Azzam al-Ahmed said.