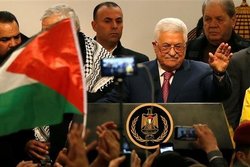 Palestinian President Mahmoud Abbas has rejected a request from US President Donald Trump to speak by phone, an official said Monday.

RNA - Trump made the request a few days ago, said the official, who asked not to be named due to restrictions on speaking to the media, Anadolu news agency reported.

They will discuss the prospects of his controversial Middle East peace deal, dubbed the "Deal of the Century".

Abbas has announced on several occasions his refusal to accept the US plan, as it does not address the issues of Jerusalem, refugees and borders.

Israel's Channel 12 and 13 has said that Trump's plan would recognize Israeli sovereignty over virtually all settlements in the occupied West Bank, which are illegal under international law.

That would effectively move the US-recognized Israeli border further East into Palestinian territory and Israeli sovereignty would be recognized over the whole of Jerusalem, which Palestinians seek as the capital of their future state.

The plan would also recognize a demilitarized Palestinian state at a later time reportedly, but Palestinian officials are highly unlikely to accept the plan, which Channel 12 said will also demand Hamas' disarmament and Palestinian recognition of Jerusalem as Israel's capital.

If the plan is revealed this week, it would come with Trump in the midst of his Senate impeachment trial and as the Israeli Knesset votes on possible immunity for Netanyahu in three graft cases.