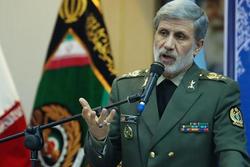 Iranian Defense Minister Brigadier General Amir Hatami underlined that the world and history will not forget Tehran's slap in Washington's face by retaliatory missile strikes against Ein al-Assad base in Iraq.

RNA - A strong slap of Iranian armed forces in the face of the US by attacking their base was done at the highest standards in terms of timing, quality and accuracy of precision-striking missiles, General Hatami said.

He added that the effect of this slap by the Iranian nation will remain in history.

Responding to US actions was a public demand of the Iranian people, and if this vicious act had been remained unanswered, the enemy would repeat its criminal approach, General Hatami said.

The Iranian defense minister noted that the Islamic Republic of Iran is always prepared to deal with any potential threat.

Timely response requires power, he said, adding that Iran enjoys all the elements of power and will to respond to any aggression and it will respond to any threat at any level with high-quality defensive weapons.