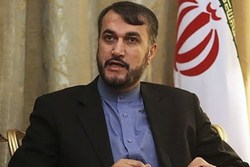 RNA - Amir Abdollahian made the remarks in a meeting with Danish Foreign Ministry's Director-General Christina Markus Lassen in Tehran on Wednesday.

He also referred to the long history of bilateral relations between the two countries, and noted that Iran and Denmark enjoy the great potential for expanding friendly relations and cooperation.

Amir Abdollahian also emphasized the importance of dialogue, and underlined the role of parliamentary diplomacy in the development of communication and cooperation between the two countries.

Lassen, for her part, stressed the importance of Iran's role and position in the region, adding that continuation of friendly dialogue with the Islamic Republic of Iran in Danish foreign policy is also very important.

Expressing concern over the escalating tensions in the West Asian region, the Danish Foreign Ministry official highlighted that the use of negotiations and political dialogue was the only way out of the current situation and removing the risk of war in the region.

Referring to the nuclear deal and the trigger mechanism, the Danish official noted that Denmark wants all parties to return to and abide by their commitments.

According to Fars News Agency, Iranian Foreign Minister Mohammad Javad Zarif warned  on Monday that his country will leave the Non-Proliferation Treaty (NPT) if the Europeans take Iran's nuclear case to the UN Security Council.

“The European’s statement is in no way legal. If the Europeans take another step, Iran will consider leaving the NPT according to a letter by the Iranian president in May 2019,” Zarif said, addressing the parliamentarians in Tehran.

"But If the Europeans continue to play more political games, we will have many options," he stressed.

“Iran is designing a new and more effective step that will be taken before leaving NPT in case the Europeans do not fulfill their responsibilities to the deal and continue their claims,” he highlighted.