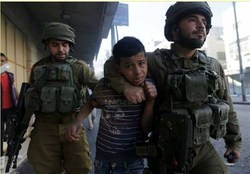 Israeli authorities have locked up a Palestinian child in solitary confinement for nearly four weeks after abducting him from the occupied Jerusalem al-Quds, local media reports say.

RNA - According to the Commission of Detainees and Ex-Detainees Affairs, 15-year-old Musaab Abu Ghazalah was held in solitary confinement for 27 days at Ofek Prison, where only teenagers are jailed, the Palestinian Information Center reported on Sunday.

This came after Israeli prison authorities rejected his request to be transferred to a jail where Palestinian prisoners are held.

Israeli jailers also obstructed his lawyer’s repeated attempts to visit him in jail.

Abu Ghazalah was detained by Tel Aviv regime forces from Jerusalem on December 22 after an Israeli court sentenced him to three months in jail. He had already been placed under house arrest for one and a half years.

In May 2019, a study by Abdul-Naser Farwana, a Palestinian ex-prisoner and researcher at the Detainees and Ex-Detainees Affairs Commission, found that Israel had arrested some 16,500 Palestinian children since the outbreak of the Second Intifada (uprising) in late-2000.

Evidence collected by Defense for Children International - Palestine shows these children endure harsh detention conditions while held in isolation, such as 24-hour lighting. Most reported they had nowhere to rest besides a filthy mattress on the floor.

Although minors under 12 years of age are not allowed to be arrested or detained under Israeli law, they are not immune to being made prisoners for allegations of throwing rocks at Israeli forces.

Back in March last year, the UN children’s agency, UNICEF, said that around 40 Palestinian children had been killed and hundreds more wounded in one year of anti-occupation protest rallies along the fence that separates the besieged Gaza Strip and the Israeli-occupied territories.

It also strongly called for an end to violence against children in Gaza and elsewhere across the occupied territories.

A recent decision by the International Criminal Court (ICC) to launch a full investigation into war crimes in Palestinian territories has raised alarm among current and former Israeli officials and military personnel, who may face global arrest warrants as a result of the probe.

On December 20, 2019, ICC Chief Prosecutor Fatou Bensouda said a preliminary examination into war crimes, opened in 2015, had provided enough information to meet all criteria for opening an inquiry.

Macron faces off with Israeli forces at Jerusalem al-Quds church