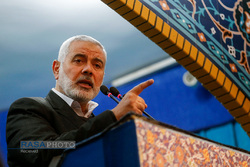 RNA - “I announced that the resistance project in the Palestinian lands will continue, it will not be loosened and there will be no retreat. These assassinations and martyrdoms will boost our insistence on stability and resistance and we will continue this path until the freedom of Holy Qods and the Palestinian territories, as well as freedom of regional nations,” Haniyeh said at the funeral procession of General Soleimani.

He reiterated that General Soleimani was "the martyr of Qods”.

He made the remarks in the funeral procession of the General in Tehran, adding he devoted his life for supporting the Palestinians and oppressed people of the region.

Haniyed extended his condolences to Supreme Leader of the Islamic Revolution Ayatollah Seyed Ali Khamenei, the Iranian government, as well as the Iranians on the martyrdom of General Soleimani.

“What the Americans have committed is an atrocity crime that has many manifestations in occupation of Palestine,” he underscored.

He called on the nations and governments to bring to justice the perpetrators of the Soleimani's assassination.