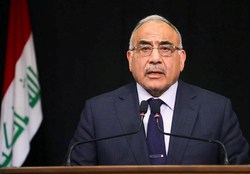 RNA - The United States confirmed early on Friday that its forces had assassinated Gen. Soleimani and Abu Mahdi al-Muhandis, the second-in-command of Iraq’s pro-government Popular Mobilization Units (PMU), in an attack at Baghdad’s international airport.

Abdul-Mahdi blasted the US strike as a blatant act of “aggression” that would "spark a devastating war."

He described General Soleimani and al-Muhandis as the icons of Iraq’s victory over Western-backed Daesh terrorists.

"The assassination of an Iraqi military commander in an official post is an aggression against the country of Iraq, its state, its government and its people," the PM said, referring to al-Muhandis.

He described the strike as a "flagrant violation of the conditions authorizing the presence of US troops" on Iraqi soil and said it should be met with legislation that safeguards Iraq's security and sovereignty.

Abdul-Mahdi called on the Iraqi parliament to convene an extraordinary session. The parliament said it will reconvene on Saturday to decide the future of America's military presence.

Sadr sent his condolences to the Iranian nation and Leader of the Islamic Revolution Ayatollah Seyyed Ali Khamanei.

He condemned the targeted assassination of General Soleimani and al-Muhandis as an attempt by Washington to stifle anti-US sentiments in Iraq and the nation's resolve to uproot foreign-backed terrorism.

The cleric also ordered all his forces to maintain readiness to defend the Arab country against further violations by American forces.

"As the patron of the patriotic Iraqi resistance I give the order for all mujahideen, specially the Mehdi Army, Promised Day Brigade, and all patriotic and disciplined groups to be ready to protect Iraq," he said in a statement.

He also called on all sides to behave with "wisdom and shrewdness.

End of US military presence in Iraq 'imminent'

Qais al-Khazali, the leader of Iraq’s Asa’ib Ahl al-Haq movement, ordered his fighters to be on high alert and said the strike would spell the end of the US military presence in Iraq.

"All fighters should be on high alert for upcoming battle and great victory. The price for the blood for the martyred commander Abu Mahdi al-Muhandis is the complete end to American military presence in Iraq," local TV channel al-Ahd quoted Khazali as saying.

He said the two commanders had dedicated their lives to fighting terrorism and their assassination would bring about harsh consequences.