Either Escape or Order Coffins for Troops Stationed in ME 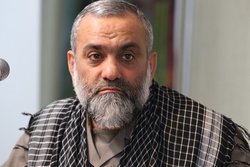 Islamic Revolution Guards Corps (IRGC) Deputy Commander for Coordination Brigadier General Mohammad Reza Naqdi warned the US to pull out of the entire Muslim world or wait for carrying the dead body of its soldiers back home.

RNA - “The White House must either close its military bases in the Islamic region or go to the market to purchase coffins for its troops,” Brigadier General Naqdi said on Friday, hours after the assassination of IRGC Qods Force Commander General Qassem Soleimani by the US terrorist forces at Baghdad international airport.

“The Zionist regime must pack their bags and return to European countries where they originally belong to, or they should wait for the strong blow of the Islamic nation,” he added.

“The decision is up to them because we do not like to shed blood,” Brigadier General Naqdi underlined.

Lieutenant General Soleimani was martyred in a targeted assassination attack by US aircraft at Baghdad International Airport early Friday morning.