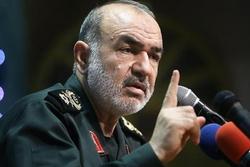 RNA - Relying upon the assistance of the Almighty God, “we will defeat enemies of the country so much to accept that they cannot overcome us”, General Salami said in Mahshahr in the Southern Khuzestan province on Wednesday.

“The flag raised by the Islamic Republic of Iran will never fall and this way will go ahead forever,” he added.

In the current situation, enemies of the country are getting weak and sustain severe defeats, General Salami stressed.

In relevant remarks in December, General Salami warned the US, UK, Israel, and the regional regimes about the consequences of their meddlesome policies against Tehran, adding that they will see their interests on fire if they continue stirring sedition in Iran.

“I tell you – the leaders of America, Israel, Britain, and the regional enemies who instigate sedition – if you don't stop sedition, we will set fire on your interests, and this is our last word,” he told a gathering in Rey, South of Tehran.

“We tell our enemies: we will chase you, find you, and take revenge on you,” he warned.

General Salami had earlier said that the enemies were attempting to incite “sedition” in Iran with the goal of “making up for their successive defeats against the Iranian people”.