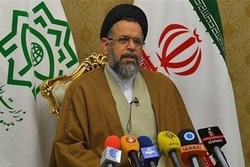 Iranian Intelligence Minister Seyed Mahmoud Alavi lambasted Washington for its negative propaganda against Iran in the past 40 years, stressing the need for developing the tourism industry in the country.

The global arrogance led by the US has done its best over the past 40 years to present a negative image of the Islamic Iran to the world, as the foreigners consider Iran as a devastated country with violent people, Alavi said, addressing a gathering in the Northwestern province of Ardabil on Wednesday.

Any foreign tourist who enters Iran introduces real image of the country as an ambassador and media, he said.

The best way to counter the enemies' propaganda is to attract more tourists to the country, Alavi said, noting that tourists coming to Iran are amazed to see Iran as a civilized and prosperous country with kind and cultured people.

His remarks came after Iranian Minister of Cultural Heritage, Handicrafts and Tourism Ali Asqar Mounesan said that according to the World Tourism Organization (WTO) statistics, Iran gained $11.7 billion in direct revenue over the past Iranian year (ended March 20, 2019), and this year it has brought total revenue of $11 billion for the country.

Mounesan noted that Iran's tourism potential is high in various sectors and areas such as the southern coast, central desert, nature and geography of the north and west of the country, as well as the culture and customs of the people.