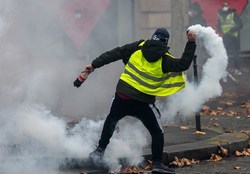 France’s general strike is stronger than ever, as much-needed time off for the West’s New Year’s holiday has fewer workers showing up since the start of the strike.

RNA - Unions say France is having it’s 'Thatcher' or 'Reagan' moment. Those Anglophone leaders irrevocably broke the power of unions in their nations, setting off a four-decade spiral of inequality, stagnant wages and reduced workers’ rights.

If that is true President Emmanuel Macron hasn’t said so, as he and his spokesperson have essentially refused to discuss the strike in public. That only contributes to perceptions that he is aloof, uncompromising and authoritarian.

Macron’s proposal is woefully bereft of details despite aspiring to be the world’s very first one-size-fits-all, universal pension scheme. No country’s workers have ever accepted such a regressive pension system.

Using 'divide and conquer' among France’s so called 'independent' unions has always been a successful tactic during the age of austerity. The government has been trying to buy off key unions to weaken the strike, and airline pilots union recently called off their strike plans after getting a sweethearts deal for their members.

Paris will not be sizzling for New Year’s Eve at least not in public: the public transport shutdown has turned urban areas into ghost towns every night for 27 consecutive days. The new year and the new decade will seem very much like the same old age of austerity in France.

Number of Homicides in London Climbs to 10-Year High