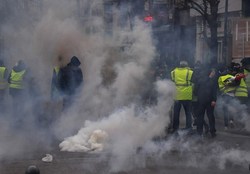 New weekend travel turmoil has hit France after the most serious nationwide strike in years began for the third day in a row.

RNA - Hundreds of thousands took to the streets on Saturday, with key transport services brought to a standstill.

The nationwide strike, the largest since 1995, which began on Thursday against President Emmanuel Macron‘s plan to overhaul the pension system that would see workers retiring later or facing reduced payouts.

Unions vowed to shut down the Paris metro, according to the SNCF rail operator on Saturday. Many cancellations are also expected on the international Eurostar and Thalys services.

The mass protests shut down subways, disrupted schools and left passengers stranded at airports as flights were cancelled across the country.

Thousands of additional police officers have been deployed in Paris alone to prepare for potential violence.

Reports indicate that while most of the rallies were peaceful, some black-clad protesters were seen smashing windows and throwing stones during the rally in Paris.

On one occasion, protesters set a construction site trailer on fire.

Many people, including three journalists, were injured after reportedly being hit by tear gas or stun grenades.

The government of Macron, which is expected to unveiled reforms plan on Wednesday, has ruled out any possibility of abandoning it, despite being prepared to bring changes in more gradually.

In response to the new round of protests, Prime Minister, Edouard Philippe, said the government would work with trade unions to introduce a single points-based pension scheme which would require the French to "work a bit longer" and replace dozens of more advantageous plans currently enjoyed by public-sector workers.

But he emphasized that the changes were going to be introduced "progressively, without harshness.”

Unions say the new system will introduce a "points system" for retirement, which will have a significant impact on both the public and private sectors, and will force them to work well beyond the official retirement age of 62.

President Macron is already faced with a major challenge to his rule from “Yellow Vest” protesters, who have been holding weekly demonstrations for more than a year.

Secretary General of the General Confederation of Labour, Philippe Martinez, who formerly called Macron “stubborn,” said his group would not back down until the overhaul was scrapped.

A senior official at the president’s office said on Thursday that Macron is “calm and determined” in the face of the strikes.

Macron is “watchful that public order be respected, watchful as to the difficulties for French people, and watchful also that the right to strike is respected,” the official, who spoke on condition of anonymity told reporters at a news briefing.

He also suggested that the president was totally determined to see his pension overhaul through.

Muslims march against Islamophobia in France