Taliban reject reports of planned ceasefire in Afghanistan amid US talks 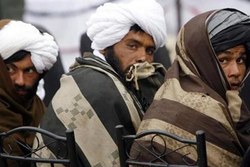 The Taliban have rejected reports that the militant group has agreed to observe a brief ceasefire in Afghanistan amid ongoing peace talks with the United States.

RNA - “In the past few days, some media have been releasing untrue reports about a ceasefire,” said the Taliban in a statement on Monday, adding that the group “has no ceasefire plans.”

The truce agreement was reported by the Associated Press on Sunday evening. The report said the Taliban’s ruling council had not yet decided when the ceasefire would begin.

According to the report, it was suggested that the ceasefire would last for 10 days. The AP added that the Taliban chief was expected  to approve the temporary ceasefire agreement.

The report also said four members of the Taliban negotiating team had met for a week with the council before the agreement was reached.

The negotiating team returned on Sunday to Qatar, where the Taliban maintain a political office and where US representative for Afghanistan Zelmay Khalilzad has been holding talks with the militants’ negotiators since September 2018.

The Taliban group refuses to negotiate with the Kabul government, which it regards as being illegitimate and a US puppet.

In September, the peace process in Doha came to a halt while both sides seemed close to a deal, with President Donald Trump declaring the talks with Taliban “dead” after the militant group killed a US soldier in a Kabul bombing.

Talks resumed after Trump made a surprise visit to Afghanistan at the end of November.

So far, there has been no immediate response from Washington regarding the temporary truce with the Taliban. A ceasefire had been demanded by Washington before any peace agreement could be signed.

The Taliban has been demanding that all foreign forces — US troops included — leave Afghanistan and end the invasion of the country, which began in 2001 under the pretext of fighting terrorism.

Even as the Taliban are engaged in talks about ceasing hostilities, the militant group has kept up it attacks across Afghanistan.

Earlier on Monday, a Taliban raid killed at least 14 Afghan forces and injured five others in the northern province of Jowzjan, local sources said. Two government troops have also been missing.

Last week, the Taliban targeted a US convoy in a bomb attack in Afghanistan’s northern Kunduz Province, killing an American soldier.

100,000 Afghan civilians have been killed or injured over the last decade