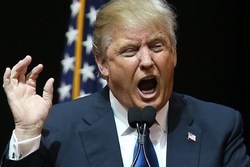 US House Judiciary Committee Chairman Jerrold Nadler has defended the impeachment proceedings against Donald Trump, calling the US president a “threat” to national security.

RNA - Nadler said in an interview with ABC News on Sunday that the "integrity" of US elections was at risk since Trump had solicited foreign interference in the previous vote.

"This president conspired, sought foreign interference in the 2016 election," the House Judiciary Committee chairman said. "He is openly seeking interference in the 2020 election and he poses a continuing threat to our national security and to the integrity of our elections to our democratic system itself. We cannot permit that to continue."

Trump’s election campaign is accused of having colluded with the Russian government to try to influence the 2016 presidential election.

US intelligence agencies claim Moscow meddled in the election with a campaign of email hacking and online propaganda aimed at sowing discord in the United States, hurting Democratic candidate Hillary Clinton and helping Trump.

Both Trump and Russia have repeatedly denied the accusations.

House Intelligence Committee Chairman Adam Schiff was the other leading Democrat that defended the the impeachment case against Trump and described obstruction of Congress as the "most serious of the articles" of impeachment against the US president.

"Going to court is not an impeachable offense but stonewalling completely, refusing to comply with the oversight of Congress, particularly during an impeachment inquiry is,” Schiff said.

Schiff cautioned that if the Republican party is "prepared to say a president of the US can simply say no to any Congressional subpoena and tie up Congress for years in litigation, it is going to have to accept corruption, malfeasance, negligence, misconduct, in any future president, Democrat or Republican."

"In many respects, I think this is the most serious of the articles because it would fundamentally alter the balance of power and allow for much greater misconduct in the chief executive of the country," he said.

The US president is facing an impeachment inquiry in the US House over pressuring Ukraine to find dirt on his political rival, former Vice President Joe Biden, who is running to beat him in the 2020 election.

‘I'd impeach Obama if he did the same as Trump’

Elsewhere in his remarks, the House Intelligence Committee chairman said that he would even support impeaching former President Barack Obama if he had committed the same alleged offense that led to approving articles of impeachment against Trump.

"I don't think any of us have any question that had Barack Obama engaged in the activity, the conduct which is the subject these articles of impeachment, every one of these Republicans would be voting to impeach him," Schiff said. "And you know something, I have to hope to hell, George, if it were Barack Obama, I would vote to impeach him."

Rep. Adam Schiff: "I don't think any of us have any question that had Barack Obama engaged in the activity ... every one of these Republicans would be voting to impeach him."
"I hope to hell ... if it were Barack Obama, I would vote to impeach him." https://t.co/P6iz1j1VA4 pic.twitter.com/xlVrk2I3qG

The House is expected to vote this week on the articles of impeachment, which passed the chamber's Judiciary Committee in a party-line vote last week.

The Senate, where Republicans hold a majority, would then decide whether to remove Trump from office.

It takes some 20 Republican senators to reverse the results of the 2016 election and remove Trump.

Trump, who has denied wrongdoing in regard to the Ukraine scandal, is still insisting that Biden should be investigated for his dealings with the country. Biden also denies any wrongdoings.

Poll: 50% of Americans Say Trump Should Be Impeached, Removed

Trump impeachment to ‘die quickly’ in US senate, Graham vows

Trump to Announce Withdrawal of +4,000 Troops from Afghanistan Soon

US magazine blasts US bid for 'violent revolution' in Iran