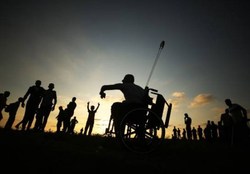 Israeli forces have injured 27 Palestinians during the “Great March of Return” rallies, which have continued in the besieged Gaza Strip.

RNA - The Gazan Health Ministry said the 27 people were injured by the Israeli forces in the eastern part of Gaza on Friday.

Ashraf al-Qedra, the spokesman for the ministry, said that four of the injured people had suffered gunshot wounds.

The organizers of the rallies announced the annulment of the protests last Friday, attributing the decision to their desire to safeguard the lives of the protesters, referring to Prime Minister Benjamin Netanyahu’s attempts to “export his internal crisis to our besieged strip” after his failure to form a new government.

However, a number of people staged a protest east of Khan Yunis in the southern Gaza Strip last Friday and were met by Israeli fire, which left a 16-year-old dead.

The “Great March of Return” rallies were held every week since March 30 last year. The Palestinians want the return of those driven out of their homeland by Israeli aggression.

Israeli troops have killed at least 307 Palestinians since the beginning of the rallies and wounded more than 18,000 others, according to the Gazan Health Ministry.

In March, a United Nations fact-finding mission found that Israeli forces committed rights violations during their crackdown against the Palestinian protesters in Gaza that may amount to war crimes.