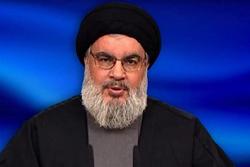 As the realization of the Lebanese people’s dream of a clean and competent government awaits political decisions, Hezbollah is calling for legal action against corrupt officials.

RNA - In a televised speech on Monday, Hezbollah's secretary general Sayyed Hassan Nasrallah stressed that Lebanon’s judges can bring about the revolution everyone has been seeking over the past weeks.

Nasrallah, who saw speaking on the occasion of Hezbollah’s ‘Martyrs’ Day’, noted that the resistance movement has long supported any measure aimed at tackling corruption in Lebanon.

He added that the nationwide demonstrations have made the Lebanese more united than ever in the fight against corruption.
Hezbollah’s leader also stressed that the US and its Lebanese allies are behind the country’s financial difficulties, urging Lebanon’s economic officials to reduce their reliance on American companies and look for partnerships with other countries including China, Russia and Iran. He also said the US was trying to deepen Lebanon’s economic crisis through imposing sanctions on some Lebanese banks.

Earlier, the governor of Lebanon's Central Bank Riad Salameh told reporters at a press conference that Lebanon has the capabilities to protect the stability of the Lebanese pound against the dollar. However, he said the blacklisting of a Lebanese bank by the US played a major role in Lebanon’s monetary crisis. Meanwhile on the streets, people are still calling for the formation of a non-corrupt government.

According to Press TV, Sayyed Nasrallah and parliament speaker Nabih Berri have also called on Lebanese lawmakers to work towards lifting the immunity of former and current ministers and government officials in order to allow for accountability.

While Lebanon’s path towards the formation of a new government seems to be bumpy, the judicial system has already begun work on one of the main demands of the protesters which is fighting corruption. Observers say this fight can unite the Lebanese who consider it a top priority.

One killed as protesters defy Aoun’s call to end protests

Daesh Militants’ Home States Must Take Them Back